Olivier Cousin before the Tribunal (part 2) 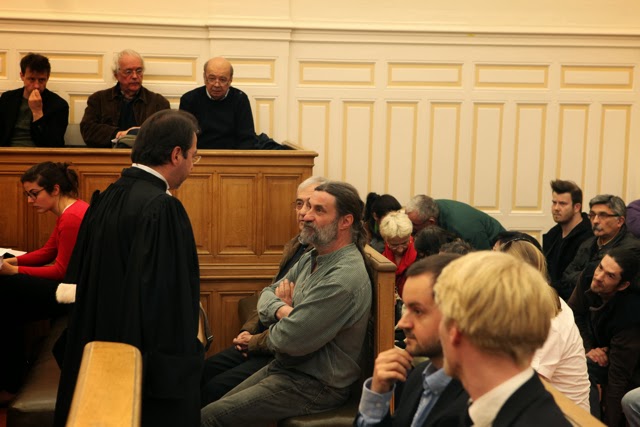 Guillot raised the paradox of foodstuffs now carrying detailed nutritional information as a result of the mad cow disease crisis, while vin de France was allowed to carry minimal information. There was a need and demand for full traceability. Guillot said that the appellation system had stolen 'the terroir' by appropriating place names.

Alain Fouquet, avocat representing the INAO and La Fédération Viticole de l'Anjou et de Saumur
It was Alain Fouquet who had requested on 2nd October 2013 that the trial be postponed. He started by showing a the results of a poll of visitors to Anjou: 67% gave wine and vineyards as their primary motive for visiting Anjou.

Fouquet explaining that the Fédération was founded in 1918 and the importance of producers working together. He spoke about the criteria of excellence and the right of the consumer to know from where a wine comes. Cousin was a little fraudster but it was not the intention of the Fédération or the INAO to crush him. Cousin had used Anjou on his labels without respecting the cahiers des charges (production criteria) and profiting from Anjou's reputation without paying his subscription to the Fédération.

He said that the Fédération had tried to use a proces verbal to settle this dispute but had had no response from M. Cousin, so had been obliged to come to the Tribunal.

Fouquet made considerable play on Cousin's exports to the USA and 'China'. The mention of China brought guffaws from many of Olivier's supporters sitting and standing in the public area at the back of the court as Cousin doesn't export to China but Japan. Fouquet appeared to be denigrating Chinese wine consumers by suggesting they knew nothing about wine.

He produced a bottle of Cousin's Pur Breton, quickly removing the capsule to show that the corks said Anjou Olivier Cousin – another example of Cousin continuing to try to fool the consumer and to break the rules.

Fouquet also mention Noma, voted the best restaurant in the world which lists Olivier's wines. He brought up the recent case of food poisoning there. Again Fouquet got his geography wrong by saying that it was in the USA. Eric Morain, Olivier's lawyer corrected him, to loud laughter from the back of the court, informing Fouquet that Noma is in Denmark. For a lawyer defending the importance of 'd'origine', geography did not appear on yesterday's evidence to be Fouguet's strongest suit.