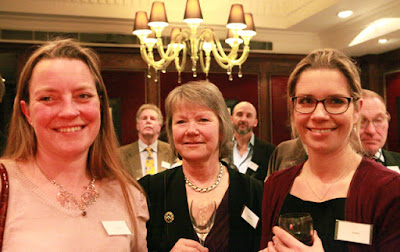 The shortlisted books for the 2015 prize in the drink category are:

Mimi Avery assessed the Drink Books. The winner will be announced on 28th January 2016 at The Goring Hotel, Victoria. The Goring Hotel has now become the established venue for the awards ceremony.

Many congratulations to those shortlisted.

From the Press Release:

Thirsty Dragon: China's Lust for Bordeaux and the Threat to the World's Best Wines by Suzanne Mustacich (Henry Holt)
An inside view of China's quest to become a global wine power and Bordeaux's attempt to master the thirsty dragon it helped create. The wine merchants of Bordeaux and the rising entrepreneurs of China would seem to have little in common—old world versus new, tradition versus disruption, loyalty versus efficiency. And yet these two communities have found their destinies intertwined in the conquest of new markets, as Suzanne Mustacich shows in this provocative account of how China is reshaping the French wine business and how Bordeaux is making its mark on China.

Thirsty Dragon lays bare the untold story of how an influx of Chinese money rescued France's most venerable wine region from economic collapse, and how the result was a series of misunderstandings and crises that threatened the delicate infrastructure of Bordeaux's insular wine trade. The Bordelais and the Chinese do business according to different and often incompatible sets of rules, and Mustacich uncovers the competing agendas and little-known actors who are transforming the economics and culture of Bordeaux, even as its wines are finding new markets—and ever higher prices—in Shanghai, Beijing, and Hong Kong, with Hong Kong and London traders playing a pivotal role.

At once a tale of business skullduggery and fierce cultural clashes, adventure, and ambition, Thirsty Dragon offers a behind-the-scenes look at the challenges facing the world's most famous and prestigious wines.

Madeira by Richard Mayson (Infinite Ideas Ltd)
Madeira wine is currently experiencing a renaissance. It is a wine that behaves like almost no other. Heat and air, the sworn enemies of most wines and winemakers, conspire to turn Madeira into one of the most enthralling of the world’s wines as well as the most resilient. Madeira wines from the nineteenth and even the eighteenth centuries still retain an ethereal, youthful gloss. Once the cork is removed, the wine comes to no harm, even if the bottle is left open and on ullage for months on end.
If ever there was a wine to take to a desert island, this is it. Although Madeira was only discovered in the fifteenth century, the island and the wine trade have a long and involved history. After a short historical introduction Madeira: The Islands and their Wines rounds on the present: the physical character of the archipelago, the state of the vines and vineyards and the way in which the wines are made. A guide to the current producers (shippers) follows along with a detailed appraisal of their range of wines. There is also a chapter for collectors of older wines, many from shippers that no longer exist but whose names live on in bottles of wine that are still found in cellars all over the world. Wines dating as far back as the eighteenth century are featured in the book, along with quality appraisals. Madeira is without doubt one of the most difficult wines to describe but it is certainly the most uplifting. There is a short section on the language of tasting Madeira as well as information on buying, keeping and serving the wines. The book concludes with a travel guide for anyone visiting the islands. This unique book on the islands and their wines explains what it is that makes Madeira so special.

Soda Politics: Taking on Big Soda (and Winning) by Marion Nestle (Oxford University Press)
Sodas are astonishing products. Little more than flavoured sugar-water, these drinks cost practically nothing to produce or buy, yet have turned their makers - principally Coca-Cola and PepsiCo - into multibillion dollar industries with global recognition, distribution, and political power. So how did something so cheap come to mean so much and to have such devastating health and food policy consequences?

Soda Politics is a story of the American food system at work, written by the incomparable NYU scholar and public health champion Marion Nestle. It is the first book to focus on the history, politics, nutrition, and health impact of soda,
asking how we created this system, what its problems are, and what we can do to change things. Coke and Pepsi spend billions of dollars a year on advertising and lobbying to prevent any measures to limit soda, a product billed as "refreshing," "tasty," "crisp," and "the real thing" that also happens to be a major cause of health problems, from obesity to Type II diabetes. They target minorities, poor people, and children, and are involved in land and water grabs
in underdeveloped countries, where they also have redoubled their efforts at building their market share.

In fact, the marketing practices of soda companies are eerily similar to that of cigarette companies - both try to sell as much as possible, regardless of the health consequences, in any way that they can. And the public is starting to
scrutinize sugary sodas in the same way that they do cigarettes. Soda consumption is falling, and Americans are only partially replacing soda with other sugary drinks. This did not happen accidentally: the fall in soda sales is a result of successful food advocacy. Soda Politics provides the overwhelming evidence to keep up pressure on all those involved in the production, marketing, sales, and subsidization of soda.

The History of Wine in 100 Bottles: From Bacchus to Bordeaux and Beyond by Oz Clarke (Pavilion Books)
Who better to take you on a journey of discovery about the history of wine, than Oz Clarke our best-loved wine writer. A journey that takes you from the buried clay urns of Georgia in 6000 BC, to the fraudsters who have rocked the world with their multi-million-dollar counterfeiting scams. Along the way, you’ll pass through the taverns of Pompeii, discover the oldest bottle of wine that has ever been drunk, meet an Englishman who might have invented champagne, and visit the highest and coldest vineyards in the world. This entertaining and informative book tells you all you need to know about the history of bottled poetry.
Posted by Jim's Loire at 19:34