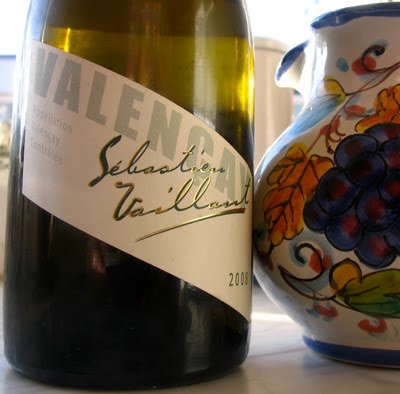 I can find little information about Sébastien Vaillant*. A Google search suggests that he may be Claude Lafond's (Reuilly and Valençay) oenologue but the specified site no longer exists and a new version of Claude's site is now under construction. Any further information about M.Vaillant would be gratefully received. 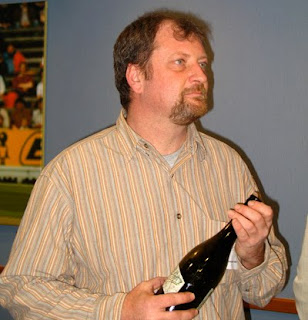 Anyway this 2008 is bottled at Le Cave de Valençay at Fontguenand (http://www.cave-valencay.com/) a few miles north of Valençay. It is a blend of 80% Sauvignon and 20% Chardonnay – the legislation for the Valençay appellation obliges producers to add a percentage of Chardonnay to their Sauvignon as pure Sauvignon is not allowed. Why? you might well ask. I suspect that this has more to do with wine politics than famously hallowed typicité. As you can see the label is modern – also the bottle is closed with a screwcap. The wine is clean and well-made with refreshing lemon and grapefruit characters and the addition of the Chardonnay rounds and fills out the palate. It has a citric and mineral finish. Good as an aperitif with fish, especially shellfish, and probably with a goats' cheese from Valençay, which comes in the form of a truncated pyramid.

* 24th January 2010: I'm told that it is Sébastien's brother who works for Claude Lafond in Reuilly. Sébastien trained with Jean Tatin (Domaine des Ballandors/Domaine de Tremblay) in Quincy before returning to Valançay. I gather that Sébastien, along with a friend called Damien, have resurrected the Valançay cooperative, which used to be a fairly large coop until it fell into disrepair. The coop now has just two members making it a serious candidate to be the smallest coop in France.