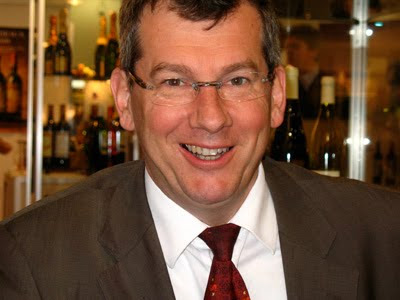 Bernard Jacob: director-general of Ackerman-Rémy Pannier
Saumur négociant and sparkling wine producer Ackerman-Rémy Pannier has just bought the Muscadet négociant, Donatien Bahuaud, from Gabriel Meffre. Donatien, founded in 1929 and once one of the leading names in the Pays Nantais particularly with its Muscadet brand – Le Master – and the Château de la Cassemichère with its claim to be the first place in the region where Melon de Bourgogne was planted, has been through somewhat turbulent times over the last decade. Initially DB formed an alliance with Pierre Chainier in 2001. Later they were bought at the end of 2004 by Gabriel Meffre and, since March 2009, have been part of the Boisset group. (For more details see my March 2009 post here.)

It would appear that Gabriel Meffre have probably decided that Donatien do not fit into their portfolio, which is centred on the Rhône Valley. Although in 2008 the Gabriel Meffre site carried this positive message about the future of Donatien within the group:

'The Management of Donatien Bahuaud and the Gabriel Meffre group are delighted to announce that following the restructuring that has been put into place over the last year, the company has now been taken out of administration and can continue the development of the business as planned.

The team of 11 staff, including new winemaker Mathieu Ressiot, has now moved to offices at Domaine du Cléray in Vallet, following the sale late last year of the previous bottling site and offices. Efficiency has been a key driver in the new structure of the business so bottling has been outsourced and commercial, marketing and logistics synergies with parent company Gabriel Meffre have been maximised. The number of wines in the Donatien Bahuaud portfolio has been reduced but several wine ranges such as La Diva, Le Master, Maison des Princes and the Domaine range "Vignobles Louis Luneau" have received extra attention in terms of winemaking and packaging.

Bertrand Bonnet, President of Donatien Bahuaud and of the Group Gabriel Meffre, said, "Everything points to a positive start in 2008 and we are confident that our wines, service and brands will exceed the expectations of customers and consumers.".'

In 2008 Donatien Bahuaud had a turnover of 3.43 million euros, while Ackerman's turnover for the year 2007 was 51.1 million euros. Donatien has considerably shrunk from what it was in the late 20th century having sold off their site at La Chapelle-Heulin. Nor am I sure how relevant its brands such as Le Master and La Diva are now in the 21st century. Whatever remains of Donatien it is good to see that it will now be run by a company based in the Loire where it is likely to fit better into Ackerman's portfolio than it did in that of Gabriel Meffre.