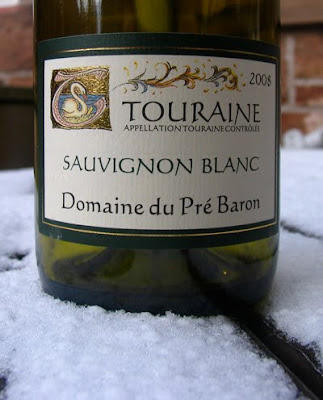 Opened this 2008 Touraine Sauvignon last evening after a very long nine and half hour drive to Edinburgh from London. We were held up by traffic jams in north London, jams of the MI and an unending series of road works on the M6. The last delay was being stopped by the police on the outskirts of Edinburh in a random drinking and driving check. "Not since last night" was our response when asked if we had last had a drink. We were tempted to add that "we could do with one of this journey" but decided that this might not be wise.
Domaine du Pré Baron has 35 hectares of vines in Oisly in eastern Tourane and is owned by Guy and Jean Luc Mardon. Their 2008 Touraine Sauvignon is pungently grassy and gooseberry flavoured and quite mouthfilling. This may well be from the 13% alcohol or perhaps just a few grams (3-4) of residual sugar or a combination of the two. It is available from Majestic Wine for £6.99 per bottle or £6.49 per bottle on a two bottle offer. Certainly good value here – more agreeable drinking than the 2008 Les Griottes Pouilly-Fumé from Jean-Pierre Bailly and substantially cheaper.

Feeling in the mood for a wine such as this! Alas no real selection here in AB-land.

Happy Xmas to everyone, I am off to Medicine Hat.