Oz Clarke: The History of Wine in 100 Bottles 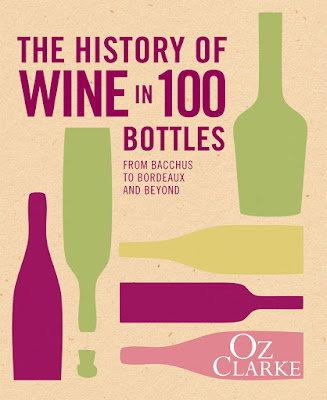 Oz Clarke: The History of Wine in 100 Bottles, Pavilion, £20, 224 pages, hbk
I must confess that when, on a casual glance, I saw 100 bottles in the book’s title my heart sank. Not yet another book on 100 wines to drink before you die or head off to the supermarket, etc.

Of course, I should have known that Oz Clarke wouldn’t produce something so naff. No, The History of Wine in 100 Bottles is a genuinely innovative book, which also has popular appeal, not easy in a subject like wine, which has been so extensively mined. This is a fine episodic survey of wine’s history as Oz explains:

‘So I suppose it is a history of wine, but I unapologetically admit that it is my version of history – it’s the events and the people that I find interesting or amusing or both. There may be bottles missing that you would have included – I freely accept that. To be honest, I could probably have written the history of wine in 200 bottles, had my editor not had the wisdom to say enough’s enough; and even then, I might have missed a few gems. And it isn’t just the big moments in wine that I celebrate – it’s also the eccentric, the bombastic, the mundane.

Do you really think it is important to celebrate the first White Zinfandel, the first Liebfraumilch, or the first ‘bag-in-box’? Well, actually, yes I do. Such events are of massive importance in the spreading of our wine culture all around the world.’

Oz starts from where wine began (6000BC), which for the sake of the book he credits to Georgia because ‘it’s just that of all the potential, Georgia has preserved and cherished a wine culture more closely linked to its past than any of the other countries.’

The History of Wine in 100 Bottles is Oz at his engaging best – a popularist in the best sense.

Email ThisBlogThis!Share to TwitterShare to FacebookShare to Pinterest
Labels: Oz Clarke, The History of Wine in 100 Bottles