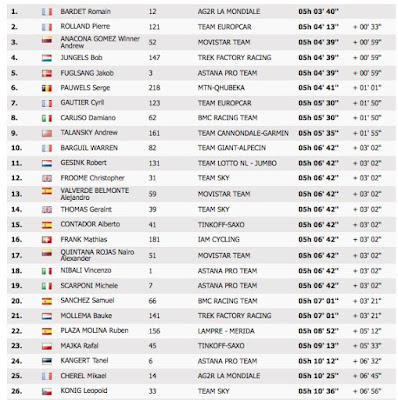 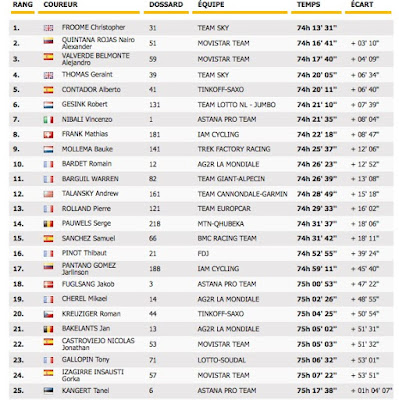 Overall after Stage 18: almost no change in Top 10 except Bardet moves up


Romain Bardet's brave first stage win has delighted France bringing them their second stage win in 2015 and helping to make up for the hitherto disappointment that the French riders who did so well last year haven't done as well this year. Some seeming to wilt under the pressure of expectation. Unlike Thibaut, Pinot Bardet is a very fine descender and today's win was built on his descending skills. Bardet (12.52) is now the leading Frenchman overall just ahead of Warren Barguil (13.08).

I had thought that this stage with the long climb of the Col du Glandon and the much touted new hairpin climb – Les Lacets de Montvernier – would shake up the GC. I was wrong as all of the leading GC contenders finished together at St Jean. Les Lacets was spectacular television but wasn't decisive. Of the top ten only Bauke Mollema lost a little time – 19 seconds. Chris Froome was attacked by Alberto Contador and Vincenzo Nibali on the Glandon but although Contador gained more than 30 seconds neither attack stuck. Valverde fell behind at the top of the Glandon but easily got back on during the long descent.

In the final kilometres Froome did look a little less strong than he has throughout this Tour but he finished easily within the GC bunch.

With just two mountain stages left time is now beginning to run out for Nairo Quintana to take the Yellow Jersey from Chris Froome. Today's mountain top finish at the end of a short but very tough stage is clearly an opportunity unless Froome himself decides to attack his rivals and go for another stage win. Should Froome and Quintana finish together it will be difficult but not impossible for Nairo to take the 3 minutes and 11 seconds he needs to win the race.

On the Glandon when there were attacks going off Nairo looked across at Valverde as though to say should I attack. Presumably Valverde said no perhaps because he wasn't feeling at his best and didn't want an attack from Quintana that might have put him in difficulty, so Nairo didn't pull the trigger. This might play again in the two last mountain stages if Valverde is worried about losing his third place.

Hopefully there will be serious attacks today.

The Polka Dot Jersey competition, which has been decidedly comatose since Stage 10, has now finally burst into life with Joaquim Rodriguez and Romain Bardet tied on equal points. Both will be trying today and tomorrow to get a decisive lead but with many points available on the two mountain top finishes the Jersey could go to a leading contender if they change the current policy of allowing the breakaway to stay away and take the wins. 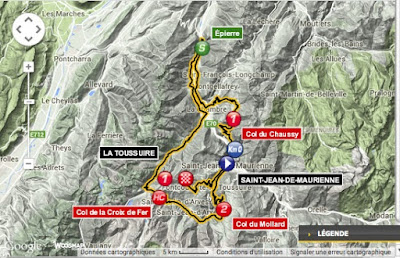 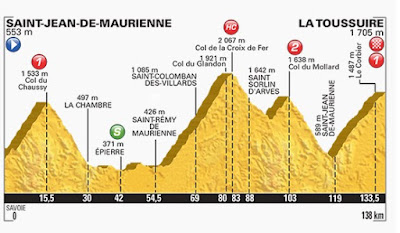 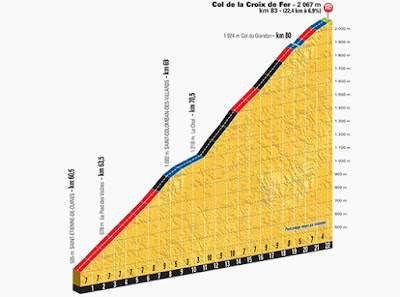 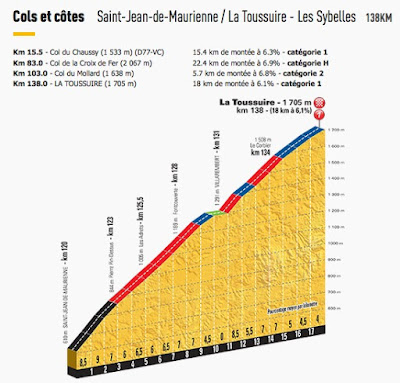 This is a short but brutal stage. Only 138 kilometres but with three major climbs including the HC Col de la Croix de Fer at 2067 metres. The stage starts with the immediate 1st Cat climb of the Col de Chaussy, so no chance for the riders to relax. I assume Bardet and Rodriguez will want to fight for the points here. GC riders will, however, be reluctant to give Bardet very much scope is he is now 10th overall.

Will today see a GC rider take the stage or will another breakaway succeed? If Quintana is to win the Tour he surely needs to take time on Chris Froome today.

This short stage will make it potentially difficult for sprinters etc. to finish within the time limit.
Posted by Jim's Loire at 09:26