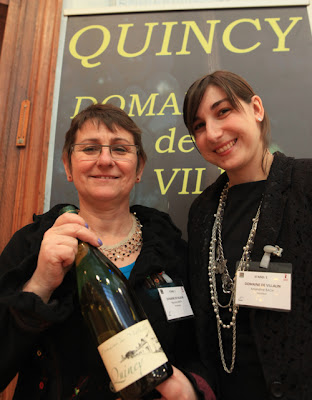 Today some of France's independent winegrowers showed their wines at the Royal Horticultural Halls in Victoria. Tomorrow it will be the turn of French Wine Discoveries at Lord's Cricket Ground. Last year the two organisations involved worked together and there was just one tasting. This year they are separate so two different tastings. I suspect it will be hard to tell them apart, especially as some of the producers will be showing their wines at both events.

Whatever the politics involved (and no I don't want any blow by blow accounts) this is another example of fragmentation – just as one sees with the Salon des Vins de Loire and the increasing number of off-Salon events that now go on.

Fortunately I tasted enough good wines to relegate the organisational politics. I was very impressed with the crisp, clean, pure and very attractive 2011 Quincy Tradition from Maryline Smith's Domaine de Villalin. I also tasted the 2011 Grandes Vignes de Villalin, which comes from a parcel vines planted on flint (silex). This is less immediately attractive being more closed up – I'm guessing that all it needs is another six to twelve months to really open up.

The domaine lies about two and a half kilometres north, north east of the village of Quincy on the east side of the Cher and just to the south of a hamlet called Le Bout du Monde (The End of the World).

Ever since it was established in 1806 it has been in hands of ther same family. Maryline Smith told me that the domaine, which has seven hectares in production with the remaining two planted with young vines, is the last in the Quincy appellation to harvest by hand. They use the indigeous wild yeasts and their approach is organic. "We don't want to get the label, so that we have the option to use other treatments in the last resort."

Currently Domaine de Villalin is not imported into the UK. It was clear that I wasn't the only one impressed with their wine, so I hope a UK merchant soon takes them on.

I will be doing a further post on this tasting tomorrow.