Bourgueil became an appellation on 31st July 1937, so is celebrating its 75th anniversary this year. 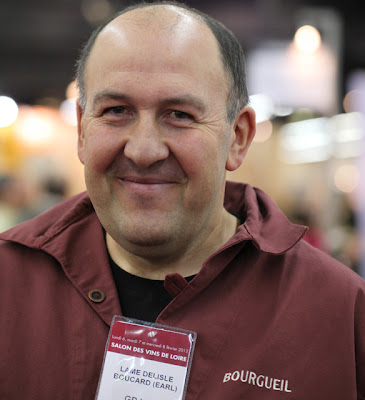 By happy coincidence details of an offer of various vintages of Lamé Delisle Boucard came through from UK importer Richards Walford. The offer includes a fine profile of the domaine written by Roy Richards, one of the founders and a director of the company. Although none of the 1937 is offered, some bottles from 1989 and 1976 are available.


'Roy Richards: The Loire revisited – Lamé-Delisle-Boucard
March 2012
In the early seventies when I was living in Paris, it was possible – and indeed affordable – to purchase mature red Loire wines. Restaurants like the Petit Riche still listed the 1947 vintage in both Bourgueil and Chinon. The reserve list of the Nicolas chain of wine merchants also carried an astonishing range, and these Cabernet Franc wines were thereby able to display their extraordinary longevity. I still have my tasting notes from this time and two names crop up frequently – the house of Couly-Dutheil in Chinon and that of Lamé-Delisle in Bourgueil, with in both instances the 1964 vintage making regular and delicious appearances if my palate is to be trusted. I already knew of Lamé-Delisle, as they had been imported into the UK by a company, which, like so many, subsequently went under, called French and Foreign Wine Shippers, and I had bought at release the ‘69 and ‘71 vintages. The domaine then went off my radar, as I tasted lighter, more commercial cuvées of their wine on Brittany Ferries and elsewhere, until a few weeks ago I made a chance visit and discovered that they still made “vin de garde” and had it to sell.
The domaine was created in 1869 by a M. Pierre Guyot, whose son-in-law Jules Lamé was a pioneer after the phylloxera epidemic, in planting American rootstock and grafting onto it. As time went on, vines took over from other fruit and vegetables as the principal economic activity. Jules’ son Lucien married Yvonne Delisle in August 1938, only to endure a long separation after he was incarcerated by the Germans from 1939 to 1945. It was the celebrated 1947 vintage that inspired the family to stop selling in bulk to the local merchants, and to attempt the then daunting task of bottling and selling 10,000 bottles themselves. They were perhaps fortunate that the two following vintages, 1948 and 1949, were both excellent. An only child, Maryvonne was born in 1946. She in turn married a young vigneron from Benais in 1965. This was René Boucard. By 1969, his name had also been added to the label, as the family formed a GAEC, the very first in the Indre et Loire. René and Maryvonne, now retired, had two children, Philippe and Stéphanie, who currently run the domaine.
Lamé-Delisle-Boucard, unlike so many other estates, has not been fractioned by the Napoleonic inheritance laws, but has steadily increased in size over five generations to its current size of 44 hectares – a statistic for the geeks is that the rows of vines put end to end would total 220kms! This hectarage is spread over four communes, Ingrandes-de-Touraine, Saint Patrice, Restigné and Benais. There is considerable diversity of soil types here, but to keep things simple, the flatter land is made up of sables and graviers, whereas the coteaux tend to be either argilo-silicieux or agilo-calcaire (known locally as Aubois or Tuf). From these low-lying vineyards, the family produce a perfumed, elegant vin de soif called “Les Chesnaies”. Philippe calls this, self-deprecatingly, his cuvee “techno” and raises it in inox vats to preserve the youthful and fruity attack. The single vineyard coteau wines are vinified separately in old oak foudres, before being assembled to make the Cuvée Prestige. It is this latter wine that we have bought.

I tasted for over two hours in their wonderful old cellar, looking enviously at bins of fungus covered 1893s, and wondering if ever they opened them, when, to my surprise and gratification, after the tasting of commercially available vintages, Philippe suggested we tasted the 9s: 1969, 1959 and 1949. The ’69 was sweet and truffly, the ’59 still tannic and hugely concentrated, whereas the ’49 was just perfection: some mousseron on the nose, a creamy, succulent palate with more sex appeal than the ’59. A point. Philippe opined that the 2005 would evolve in the same way, so for those who have youth on their side… I took the open bottles away with me and re-tasted them 24 hours later. The ’49 had oxidised slightly, but both the ’69 and particularly the ’59 had improved on every front.
A final thought: when RW started up, it was difficult to hold down a red Loire agency, as only two or three vintages a decade were ripe enough to engage enthusiasm. This area is one that has genuinely benefited from global warming, and in recent vintages, there has not been one that was not, at the very least, worthy. Its time has come, but the prices do not yet reflect this.
Prices: Richards Walford only sell to the trade, so retail prices are approximate. Details of stockists from Richards Walford.
LDB01  2006  Bourgueil, Cuvée Prestige 150cl (Approximate retail price [apr]: £23.99)
Deep purple in colour, with a nose of fresh, ripe black fruits. Rich and opulent with a rounded mouthfeel, the fresh fruit attack gives way to soft, supple, well-developed tannins. Excellent length. Enjoy over the next ten years.
LDB01 2005 Bourgueil, Cuvée Prestige 75cl (apr: £16.49 – 75cl; £37.49 – 150cl)
This has the beginnings of secondary aromas. Black fruit , dense and ripe. Rich, but not baked like a 2003, with no excessive, extracted tannin. Quite lovely, creamy texture. Vin de garde. (tasted from half bottle)
LDB01  2002 Bourgueil, Cuvée Prestige 75cl (apr: £9.79)
Opinion is divided as to the relative virtues of 2003 and 2002. I am firmly in the 2002 camp, as it seems to me more properly to reflect the terroir, whereas 2003 resembles a fatiguing confection all too often. This example has the beginnings of truffle on the nose, and a palate, where black and red fruit jostle for attention. Delightful freshness and some way to go.
LDB01 1989 Bourgueil, Cuvée Prestige (apr: £63.49 – 150cl, £167.99 – jero)
1989 was one of two great adjacent vintages (1990 being the other; well 1988 wasn’t shabby either) preceding what was then to be a poor run. 1990 was the more elegant and less concentrated of the two; 1989 was a powerful bruiser when young, but has endured interestingly to show some sousbois and pepper on the nose with a rich, animal palate. Reaching maturity, but then these wines seem to go on forever. How far-sighted to bottle in magnum and jeroboam (300cl)! (tasted from a bottle)
LDB01  1976 Bourgueil, Cuvée Prestige 75cl (apr: £54.99)
This wine underwent an élèvage of three and a half years before being bottled in March 1981 after a very light filtration. A lovely deep garnet colour with a smoky blackberry and prune nose. On the palate the tannins are still lively without dominating the animal fruit and peppery spice. Beautifully mature but will keep for another ten years. One for those with a little less patience!
Roy Richards
Richards Walford
Importers of Wine
Hales Lodge, Pickworth, Stamford
Lincs PE9 4DJ
Sales:        +44(0)1780 460451
Email: sales@r-w.co.uk
Website: www.r-w.co.uk which includes their price list and terms and conditions.
Posted by Jim's Loire at 09:20