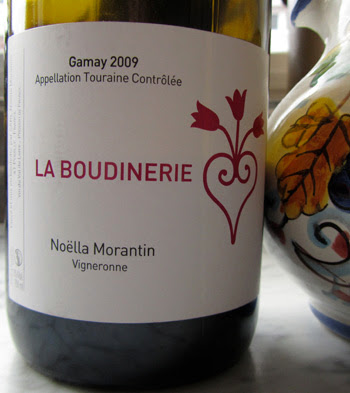 La Boudinèrie, 2009 Gamay, AC Touraine, Noëlla Morantin
There are some things that are quite inexplicable. Take Noëlla Morantin's wines, which she makes at La Tesnière, Pouillé from vineyards that she bought off the Clos Roche Blanche. She is no distance from Epeigné-les-Bois but I have never managed to go and taste her wines even though it was my intention. It has taken getting a sample of her delicious 2009 Gamay from Les Caves de Pyréne to finally get round to tasting Noëlla's wine. La Boudinèrie is quite deep coloured with plenty of black fruit aromas with some attractive earthy and spicy notes. Softly textured this has spicy complexity as well as concentrated ripe fruit. Can be enjoyed on its own but it also worked well with cold chicken served with a potato gratin and cauliflower cooked with hot paprika and ginger.

Imported by Les Caves de Pyréne Noëlla's 2009 Gamay will retail around £11.99. Not cheap I would be happier to see it around £9.99. On the other hand it does come from low yielding, organically farmed vines and it does have the potential to keep a few years. 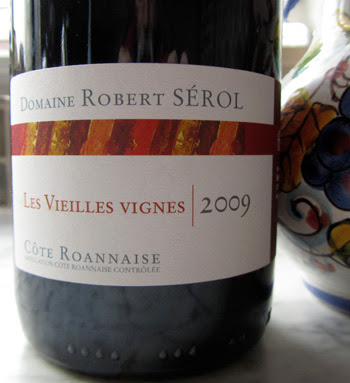 The second Gamay comes from much further up the Loire from the Côte Roannaise, some 70 kilometres east of the Beaujolais, so little surprise that the vines here are mostly Gamay. The Sérol has attractively sweet fruit with red plums and cherries to the fore. Easy drinking it is ideal as a red to drink by itself, although it lacks the complexity and the additional weight of Noëlla's Touraine.
The Robert Sérol is available from the Wine Society at £7.95.

Same here - never tasted them. I did think I might see her at last year's Renaissance tasting, but to my slight surprise she wasn't there. Maybe this year?

We will miss her again Chris as Noëlla is at la Dive Bouteille, Château de Brézé.

New names to me, though I find I am acquiring a taste for Touraine Gamay (and Gamay from Savoie), so on the table today is a bottle from Domaine de la Chaise.

JT. I've always thought you were a man of discernment. I assume that Domaine de la Chaise coomes from Saint-Georges-sur-Cher.