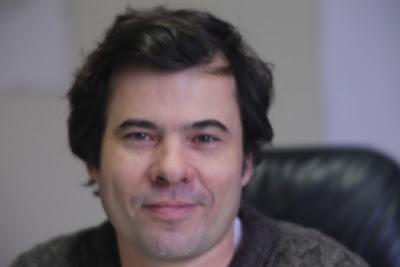 Jean-Martin Dutour
While tasting at Baudry-Dutour I asked Jean-Martin Dutour whether there had been any communication with the producers of Bourgueil since his recent election to president of InterLoire. Bourgueil has recently left Interloire to go their own way. There hasn't been any contact and I rather gather that the feeling is that Bourgueil is being left to discover how feasible, in particular the level of what additional costs there are, it is to promote themselves without the aid of a body like InterLoire, covering the region from Nantes to eastern Touraine.

We discussed in some detail the tricky question du jour – who has precedence: Jean Martin Dutour as president of InterLoire or his business partner Christophe Baudry, maire of Cravant-les-Coteaux since March 2008. Initially Jean-Martin thought it was Christophe as he was chosen by the electors (some 300-400) of Cravant. However, Sylvine Teston, the export director, pointed out that Jean-Martin had been elected by some 1400 producers. Clearly further reflection is required before a ruling can be made on this tricky question of etiquette. In the meantime I will have to decide who to greet first when I see them at the Salon des Vins de Loire. 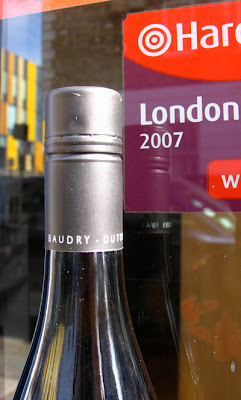 We also discussed the advantages of using screwcaps on both aromatic whites, typified by Sauvignon Blanc, and less aromatic but often delicate whites such as Muscadet or Chenin Blanc. Baudry-Dutour screwcap their stainless steel fermented Chinon Blanc for export markets but use a cork for France because French sommeliers continue to oppose screwcaps. Jean-Martin is convinced that screwcaps are the best closure for this type of white. It appears that the sommeliers oppose screwcaps because it does away with the ceremony involved in wielding a corkscrew when opening a bottle and that once this is done away with their role will appear redundant.

Of course any sommelier who thinks that their only role is to remove the cork from a bottle is a complete waste of space. The real and most useful role of a sommelier isto offer advice to their customers to help them choose a wine that they will enjoy, that will match/complement the food they are having and is at a price they can afford.
Jean-Martin says that once they explain to their private customers the benefits of screwcapping wines, they have no problem buying wines closed with screwcaps. If this is the way a large number of Loire producers think, then it is long time for them to stand up and have the balls make a statement just as the Riesling producers of Clare did in 2000 and the New Zealanders did the following year. Get together, bottle your wines under screwcap, explain to the media why you are doing this and I fancy the sommeliers' opposition will melt away. But it has to be a concerted effort.

Something for the new president of InterLoire to add to his agenda?

Warf! I have to laugh when I hear sommeliers think their rôle is diminished with the screwcap. What we need as consumers is sommeliers who know what they serve, how to select it, with what to serve it - advisers, in a nutshell. How they serve it, with a cork, a white towel, with clarks shoes or with tongs is irrelevant. And those who stick to the cork just for the show will die with the cork.

Anon. Absolutely. Time indeed for those vignerons convinced by the merits of screwcaps to make a stand.

I will make a longer text available soon, Jim (to be plundered, looted, plagiarized if you so wish). In a nutshell:
1) Absence of “corked bottles”
2) Homogeneous evolution of all bottles
3) Slowing down of the evolution of the wine with time
4) Absence of leakage
5) Possibility to “re-obturate” a half-empty bottle in a clean way
6) Esthetics
7) Environment
You see, the wine-maker side of “Luc-le-Belge” can be serious and factual too.