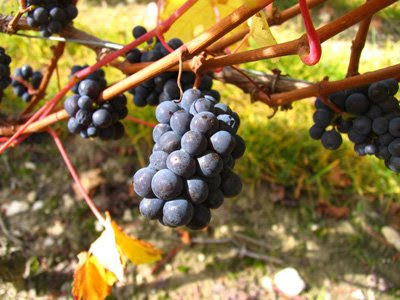 Sancerre: ripe Pinot Noir October 2008
My article on the on-going red revolution in the Central Vineyards has now been published in Decanter. It was due to appear earlier in the year but unfortunately publication got delayed. Here is a brief taster:
'Sancerre’s red revolution gathers pace
As Sancerre Rouge celebrates its first 50 years of appellation contrôlée status, the red revolution that started in the early 1990s continues. After years of making light, often dilute reds from Pinot Noir, an ever-increasing number of Sancerre producers are making more noteworthy and substantial reds.

I first became aware of the change in the late 1990s when I tasted the 1995s and 1996s from Alphonse Mellot, Domaine Vacheron and Nicolas and Pascal Reverdy.'

Unfortunately due to lack of space the wine I recommended from Fabien Geoffrenet was cut, here are the details:

Congratulation ... always good to be published?. it is always hard work...
Are u in Portugal or in France or in UK?

The article was based to an important extent on the large tasting of Central Vineyard reds held in mid-December 2008 and organised by the Bureau du Centre.

I shall be looking out for it Jim.

I've finally read the article and was surprised to learn that there's almost more Pinot planted in Sancerre than the entire acreage under vine in Malta. Thanks for the figures; I always find them so useful to put things in perspective.

George – thanks and interesting perspective on both Pinot in Sancerre and Malta.