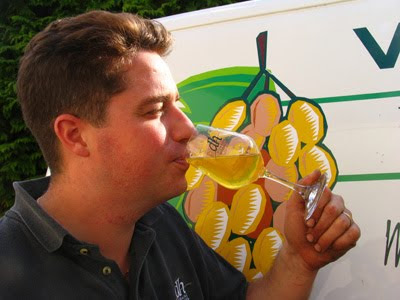 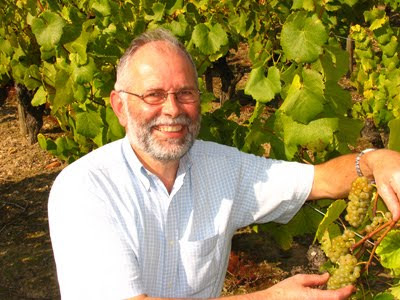 Pierre in the vines: September 2008
A call a little later to Pierre and Monique Luneau (Domaine Luneau-Papin, Muscadet-de-Sèvre-et-Maine) evoked a similar message. "Beau," said Monique. "It's looking good," said Pierre. "It has been dry and hot. The grapes and vines are very healthy. Some of the young vines, whose roots aren't very deep are suffering. It should be a good vintage – here years that end in 9 are often good – 1979, 1989 and 1999. Difficult to compare it with a previous vintages but maybe 1997 or 1999. Although it is too early to say, my guess is that our average yield will be around 50 hl/ha – some parcels at 45 hl/ha others at 55 hl/ha.

"We'll probably start harvesting around 14th September, although some of my neighbours may begin next week around 9th-10th. The technical people started checking the vineyards last Thursday to determine the date for the ban des vendanges – the grapes are at 9˚ potential alcohol with 7/8 g acidity, which is quite low for this stage."
It is, of course, dangerous to make predictions before the harvest and rather tempts fate but if the weather holds for the next few weeks then Muscadet will get, what many growers desperately need, a normal vintage in quantity of good quality. This appears to be less so for growers who rely on selling their wine to the négoce, who are not buying even though there is a shortage of Muscadet after three small vintages. Pierre told me of one producer, seen by his son recently, who has 1000 hl of 2008 still in his winery – almost the entire production of that vintage. The problem of course, is that producers, who still have substantial stocks of 2008, may not have enough space for 2009, and once the 2009s come on the market there will be even less demand for the 2008.

Pierre and Jérôme have promised to send me photos of their grapes, so I look forward to getting these and posting them up on the site.
Incidentally Guy Bossard's domaine is still for sale.
•• 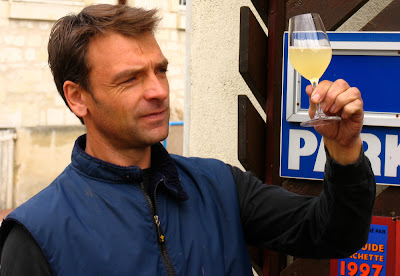 Frédéric during the 2007 harvest
Frédéric Mabileau (Saint-Nicolas-de-Bourgueil/Bourgueil)
"Superb!" is also Frédéric Mabileau's opinion on the current state of his vines, although this optimism is tempered by the vines, especially young vines, suffering from lack of rain. Fred and his family have been out regularly doing their rain dance and singing water inducing songs but to no avail.

Fred: "There is some rain forecast for this week but it will probably pass to the north of us. If it doesn't rain the grapes will be very concentrated, very small with thick skins, which will make the fermentation difficult. However, the Chenin vines at Le Puy Notre Dame are not suffering from water stress at all. I had thought that we might start harvesting at the end of September but the drought is slowing ripening, so I think it will now be the beginning of October." 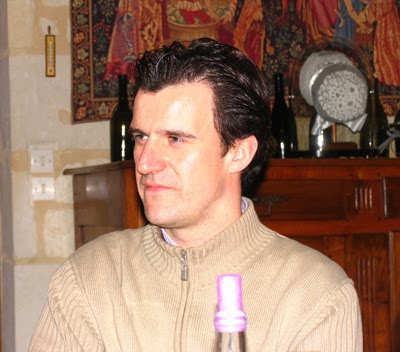 Thomas Meunier
Thomas Meunier, their export director, left at the end of July with his American girlfriend to seek his fortune in the United States. He is living in North Carolina and is now establishing an agency to help French winemakers to extend and improve distribution of their wines in the southern part of the USA.

As Thomas explains:
I'll act as an agent/importer to open up distribution in Southern states (North Carolina, South Carolina, Georgia...). My role will be to find the distributor that most suits each brand/producer, take care of the logistics from winery to distributor warehouse, providing updated trade information, train the sales team, support the sales rep in the market, create incentive and make sure of re-orders.

I'm looking for wineries that use organic or sustainable agriculture, harvest by hand, natural yeast, what we should expect to have a "Vin de Terroir". 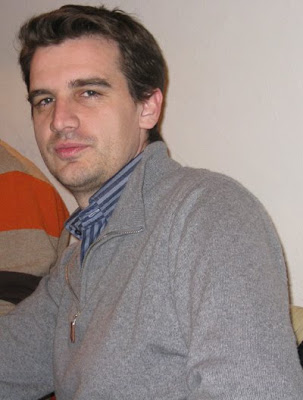 Pierre Pichot
Pierre Pichot
After four years at Interloire looking after exports, Pierre is leaving to set up an oyster bar in Les Halles, Tours. This will allow him to continue to promote Loire wines, which are naturally a great foil for oysters. Indeed there is a view that oysters were designed and invented specifically to go with Muscadet and Gros Plant. Pierre's bar is due to open in late October – around 24th.

Thanks Chris. Let's hope the weather holds a little while longer.....