Loire 2013 – certainly going to be a late vintage 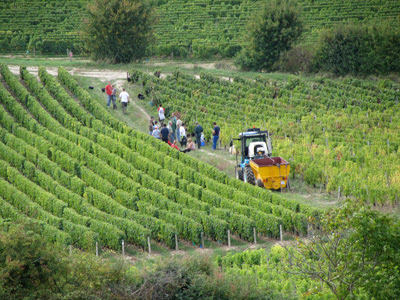 Scene from the harvest in Sancerre early October 2010

I tend to plan the broad outlines – dates when we will be in the Loire etc – of my year in January. This means that for the vintage it is always guesswork as I may choose a date to arrive that is too late, or early or sometimes just right. In 2011, which was exceptionally early, we arrived a little bit late for the early varieties so missed the vintage in Muscadet.

We arrrived in the Loire early evening yesterday and this year my planning is certainly out as the vintage is proably going to be the latest Loire harvest since I started writing about wine in 1988. Even in the Pays Nantais, always amongst the early starters, picking is unlikely to get underway much before the end of the month. Monique Luneau (Domaine Luneau-Papin) thought they would start on the 28th/29th September.  After a good flowering Monique expects that the yields will be around 45-50 hl/ha. When I saw Marie-Louise Métaireau (Louis Métaireau) in London last week she thought the harvest might be around 20th-22nd.

Speaking to Catherine Roussel (Clos Roche Blanche, Touraine) she expects that they will start in early October. Their Sauvignon Blanc is now at 10˚ potential alcohol but the acidity is still very high. However, the recent rain will help to bring the acidity down as well as swell the grapes. August and the first part of September was very dry in the Cher Valley. At the Tours weather station the first rain of September, apart from 2mm on 6th, fell last Friday and the following day there was a heavy fall (27mm). There has been some rain every day since, up to and including today. We now need it to dry out, the sun to return to bring some heat as it is only around 13˚-15˚ max at the moment. Next week is supposed to be good, so fingers crossed.

Côme Rouzé (Quincy) thought they would start around 25th September, whereas Sancerre and Pouilly are unlikely to start before 6th-7th October. The later varieties, Cabernet Franc etc., will not be picked until well into October. Jérôme Billard (Domaine de la Noblaie, Chinon) reckons they won't be harvesting before 20th October. Last year they started on 14th.

More reports to follow.
Posted by Jim's Loire at 14:57