Oddbins: 2010 plunging into the red 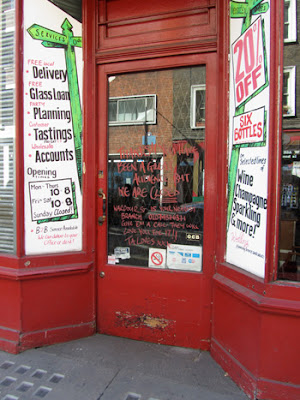 Oddbins’ balance sheet plunged into the red during 2010 dropping £6.3 million in 10 months. By October their net assets were in deficit by £2.6 million.
The trading position of the stricken drinks company deteriorated dramatically during the 2010. In December 2009 the company’s balance sheet showed net assets, after removing the debt owed by Ex Cellars Investments Ltd, of £3.7 million. By February 2010 this had dropped to £2.15 million and continued falling to £491,000 in June and by September it was minus £1.85 million before dropping nearly another £1 million by mid-October. It is understood that the equivalent position in 2009 was a surplus of around £3.4 million.
Over the same 10-month period amounts owed to trade creditors increased as did the debt to HMRC for unpaid duty and PAYE. It is also known that an increasing number of UK agencies and importers as well as producers around the world were either declining to supply or requiring cash with orders.
Comment
The balance sheet suggests that Oddbins was in very serious trouble by October-November 2010. It may well be that Simon Baile and Henry Young pinned many of their hopes on being able to trade into a more favourable position by a spectacularly good Christmas.
It is understood that, under Castel, Oddbins had typically seen a big spike in sales, believed to be in the region of £2 million, close to Christmas. Under the new regime this had not happened in either 2008 or 2009. But perhaps 2010 would be different!
However, putting a big promotional campaign together for Christmas 2010 would doubtless have been a real challenge given the number of suppliers now declining to supply as well as those who had been supplying presumably getting increasingly concerned, angry and frustrated that their bills were not being paid despite assurances that their accounts would be settled.
Yesterday I emailed Simon Baile some questions (see below) on Oddbins’ financial situation in autumn 2010. I have yet to receive a response but, if and when I do, I will post it on Jim’s Loire.

Questions to Simon Baile
a) Last autumn what steps did you plan to take to improve Oddbins’ increasingly precarious financial position? Were these steps put into effect?
b) Perhaps you were hoping that buoyant Christmas sales would turn around the situation? Did you have any large promotions planned for Christmas 2010? If so, were they successful?
c) Did the increasing difficulty of finding suppliers prepared to sell wine to Oddbins hamper your plans for Christmas?
d) Given Oddbins’ financial position in the autumn 2010 why did you continue to assure suppliers that they would be paid? 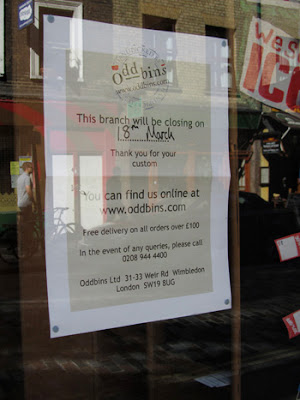 I cannot believe that Baile and Young may be in a position to buy back oddbins after destroying it the first time around. How do the company laws in the UK work??

I cannot imagine that if they are successful that any of us will supply them.

Defination of "insanity" :doing the same thing several times and expecting a different outcome. Young/Baile do not have the talent to rescue this once proud brand.

Give up guys and let the brand RIP with the respect it deserves you are just devalueing it. I am sure Mr Baile senior is so dissapointed.

In answer to your question

--How do the company laws in the UK work??

The administrators have to consider the conduct of the Directors in the last three years as part of their obligation.

Creditors do have the chance to bring any matters to the attention of the administrators.

If the administrators consider there is evidence of misconduct they will inform the DTI who will review and decide what action to take. The DTI can disqualify directors for several years and impose a fine. There are other penalties as well I think, may be liable for debts incurred after the company was technically insolvent.

Anon. At the Decanter World Wine Awards there is a general sense of incredulity from senior members of the wine trade that I have spoken to that Baile and Young could succeed on a second try.

Thank you for your site, I am an Oddbins employee and your information are really useful as we have received no official information about last year sales result so far.

In 2010 Oddbins had a tough approach policy towards their floor managers. They tried to implement a 3 strike policy and you are out for not achieving plan target! It had a really depressing effect on us and was never really applied but show the lack of consideration and leadership skills from our new Directors. All managers complained then about the lack of stock affecting sales results and customers not being able to find basic products (no ports or sherry, chianty or chablis you name it...). We were told that stock cost money and we would not be able to supply all lines

Just before Christmas we were told that Oddbins balance sheet was good and we had millions in the bank account which should reassure our suppliers...
In all store we ended up the year with no bubbly and I challenge you to find a bottle of sparkling in any of our store to that date.

I guess in business the way you perceive things is as important as reality. Don't forget H Young come form the edge found world and S Baile enthusiasm has the ability to charm his world. But the reality is we were lied to and apart from planning a shameful departure they took no strategic decision to reverse things.

Anon. Thanks for your comment. On a quick visit to the shops it is clear that there is lttle stock left. I'd, however, spot some Pol Roger in High Street Kensington about 10 days ago – part of the £240,000 debt owed to PR.