2010 Young Wine Writer of the Year 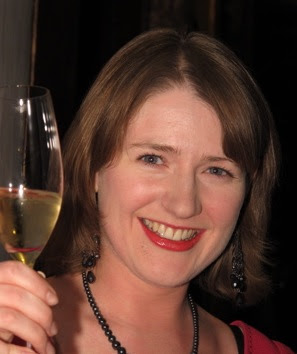 
At a presentation this evening at Australia House in London Anne McHale was declared this year's winner. She beat off strong competition from the 21 entrants, who have been whittled down to seven shortlisted candidates: Barley Blyton, Daniel Briggs, Gemma Dring, Jim Gore, Anne McHale, Anna Noble, David Stewart and Oliver Styles. Daniel Briggs and Gemma Dring were the two runners up. 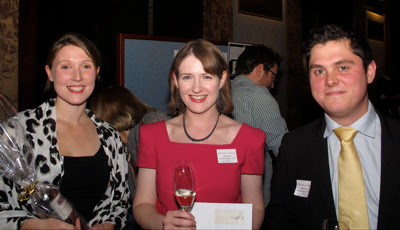 The winner and the two runners up: Gemma Dring, Anne McHale and Daniel Briggs
The award was presented by Steven Spurrier, president of the Circle of Wine Writers, and John McDonnell of Wine Australia. 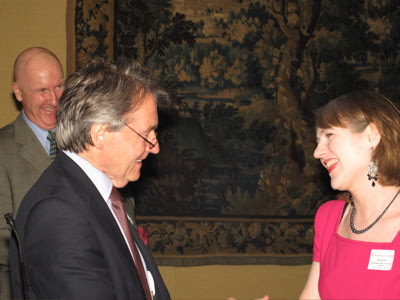 L-R: John McDonnell, Steven Spurrier and Anne McHale
Anne wins a year's membership of the Circle of Wine Writers, £1000 cheque presented by Anova Books, a two week trip of the wine regions of Australia from Wine Australia and an engraved decanter. The runners up received a bottle of Janz sparkling wine. The award is sponsored by the Circle of Wine Writers, Pavilion Books and Wine Australia. 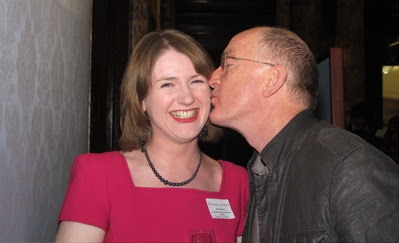 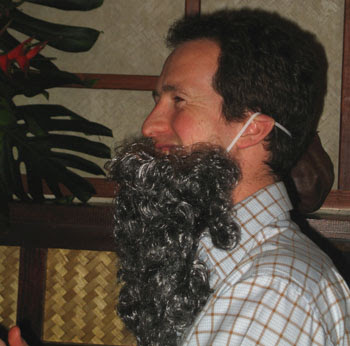 In November 2010 Peter Richards became a Master of Wine. He received the Institute of Master of Wines’ Outstanding Achievement Award, sponsored by the Austrian Wine Marketing Board, for his overall performance in the examination. Peter was also the recipient of the Villa Maria Award for excellence in the viticulture paper and the Robert Mondavi Winery Award for overall excellence in the theory part of the examination.
Peter is one of the UK’s youngest award-winning wine writers and broadcasters. TV credits include Saturday Kitchen (BBC1), Taste (Sky One), Daily Cooks (ITV1), Market Kitchen (BBC2), Great Food Live and Food Uncut. Peter has published two books on wine and his writing portfolio includes the Times Online, Guardian, Daily Mail, Decanter and Food & Wine. In 2009, Peter set up the Winchester Wine School in conjunction with his wife Susie Barrie MW; in 2010, they jointly won the IWSC Communicators of the Year Award for their 'exceptional communication skills'.
Winner in 2002                     MATT DAY 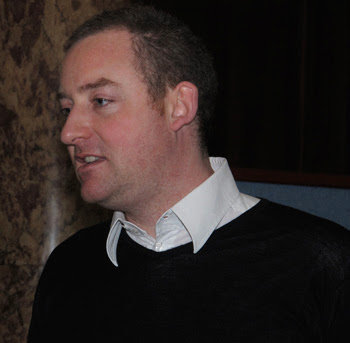 Following a period making wine in Germany Matt cut his teeth working alongside Oz Clarke on the New York Times website winetoday.com. In 2002 he started working as an assistant buyer for a Michelin-starred restaurant group and in 2006 he was a Senior Consultant for Peretti Communications, a luxury/lifestyle PR agency. In 2008 Matt set up Daygustation Limited which provides a range of services relating to the food, drink and luxury lifestyle industries. He is also one of the London Wine Academy’s main tutors running weekly courses, workshops and events. He currently divides his time between his wine and cookery school in Tuscany and London where he is responsible for the trade PR of Mumm and Perrier-Jouet Champagne.

Winner in 2003                     STUART GEORGE
Since winning the 2003 Young Wine Writer award, Stuart George has travelled widely and written for many newspapers, magazines and websites. He has judged at wine competitions in Austria, Brazil, Chile, France, Spain and Italy and worked harvests in France and Australia. Currently he is a freelance writer in London. His blog is http://bysdgeorge.wordpress.com/


Winner in 2004                     PENNY BOOTHMAN
Like so many in the industry, Penny began her career in a wine shop, before heading to New Zealand to study winemaking and viticulture. Upon returning to the UK, Penny went back to work in retail and importing while studying for the WSET certificates and diploma. She was winner of the Circle of Wine Writers Young Wine Writer Award in 2004, and subsequently joined the team at London-based Drinks Business magazine. 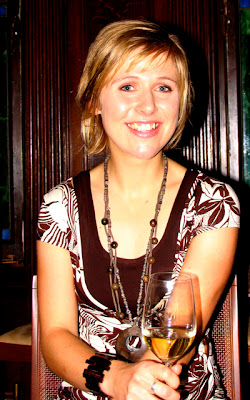 Rebecca Gibb is a British journalist, now living in Auckland. After winning the Young Wine Writer of the Year award in 2006 she joined Harpers Wine and Spirit Weekly and became a senior news reporter and features editor. Rebecca is now a freelance wine journalist and contributes to prestigious magazines including Decanter, Imbibe, Food & Travel, Wine Business International, and Sommelier Journal in the USA. She also has her own website and blog www.rebeccagibb.com <http://www.rebeccagibb.com>. In September 2010, Rebecca was named the inaugural Louis Roederer Emerging Wine Writer of the Year. She is also a qualified WSET wine tutor and is studying for the Master of Wine qualification.
Winner in 2007                     RAY O’CONNOR
Ray O’ Connor began studying wine in his native Dublin, completing the WSET Diploma in one year with the highest blind tasting results in the country. As Assistant Head Sommelier for Gordon Ramsay’s restaurant, Maze, he expanded his wine knowledge by increasing the number of niche wines on the wine list. Ray has worked harvests in the South Rhône and Germany and regularly sources wines from Europe for individuals.  He is an Approved Program Provider for the W.S.E.T. and runs wine courses in central London. Ray spends most of his time speaking to winemakers around the world for the world’s most influential wine competition, the International Wine Challenge.
Since winning the Young Wine Writer of the Year award Ray has had his work published in The Irish Times, Wine & Spirit and Drinks International. He studying to become a Master of Wine and plans to continue wine writing, focusing mainly on specialist topics.


Winner in 2008                     ANDY LLOYD
Andy entered the wine industry on the Majestic Wine graduate program in 2006 and has subsequently managed stores in Docklands and Covent Garden in London, before heading to France to take on their largest retail outlet, the Calais Superstore, which doubles as his French classroom.

Andy won the Young Wine Writers Young Wine Writer Award in 2008 and later that year worked as a wine editor on Oz Clarke's book, Let Me Tell You About Wine.  He regularly contributes to Majestic's customer magazine, Grape to Glass, and writes reviews and blogs online. 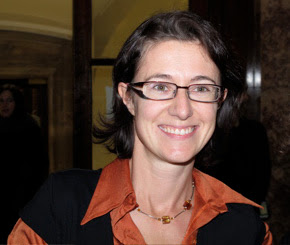 Former lawyer, Nicola, joined the wine trade in 2008 as the Liberty Wines Apprentice.  As part of her two-year apprenticeship, she worked the 2008 vintage in northern Italy and the 2009 vintage in Marlborough, New Zealand.  She still works at Liberty and is now looking after the Willunga 100, Tinpot Hut and Alpha Zeta wines.

Nicola was the winner of the Circle of Wine Writer's Young Wine Writer Award in 2009 and will be going on her prizewinner's trip to the Australian wine regions at the end of 2010.  She is keen to do more wine writing in 2011.


Winner in 2010    Anne McHale
Anne McHale works for the UK’s oldest wine merchant, family-owned Berry Bros & Rudd, in St James’s, London SW1. She teaches wine courses and co-ordinates events in their historic 300-year-old cellars, and is currently studying to be a Master of Wine. In 2008 Anne won the Vintners’Cup & Scholarship, awarded for the highest marks in the UK in the WSET Diploma. 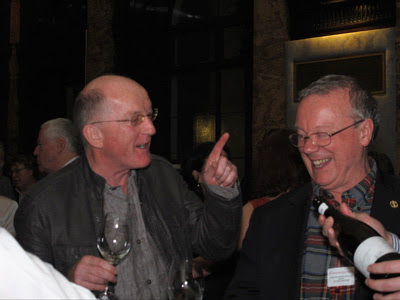 Oz suggests to Charles Metcalfe that he is mistaken 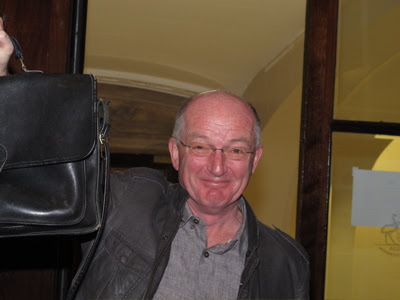 Oz Clarke: The Exchequer – no cuts this evening!
Further information from www.youngwinewriter.com
Posted by Jim's Loire at 20:10