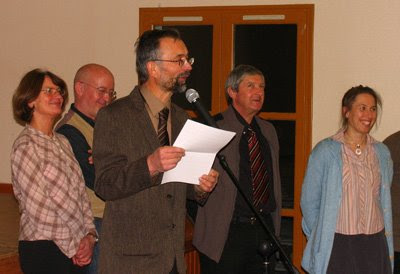 Michel Mergot (at the micro) with some of his Conseil Municipal

This evening Michel Mergot, elected Mayor of Epeigné-les-Bois in June 2008, and his Conseil Municipal offered their best wishes for 2009 to the population of Epeigné-les-Bois (Indre-et-Loire). The 'cérémonie de voeux' remains traditional in Touraine and is an occasion for the commune to come together. Some complain, especially in these belt-tightening times, that these ceremonies cost too much. Although they may be more elaborate and expensive, this is certainly not the case in a small commune like Epeigné. A few bottles of sparkling Touraine, some sandwiches and simple canapés, cannot cost very much. Rather it must be cost-effective in building a sense of community.

Despite some of the commune's minor roads being still snow-covered, the 2009 edition attracted an estimated 120-130 people of all ages. from a population of just under 400. Something that would be difficult to imagine in the UK, even in small communities.

Michel spoke for around half an hour thanking many people who play a part in the life of the commune: la poste, the bibliothèque – created this year and already with 95 subscribers, the school canteen, and, of course his Conseil Municipal – "a devoted team" – who are involved in a range of commissions – generally involving a considerable number of meetings. Michel mentioned the forthcoming carnival (29th March 2009) that will involve the 14 communes attached to Bléré. La Communauté de communes de Bléré has recently acquired 30-hectares at Sublaines, close to the A85 autoroute, that will become an economic activities zone.

Michel also reported on a driving speed survey at the hamlet of Les Bergers at the end of May / beginning of June where a few cars were clocked speeding at 90-100 k/h in a 50 k/h zone. He also spoke of improvements to Epeigné's sole rond-point (roundabout). Over the past couple of decades the French have developed a real passion for rond-points and it may be that French legislation requires every commune to possess at least one rond-point. 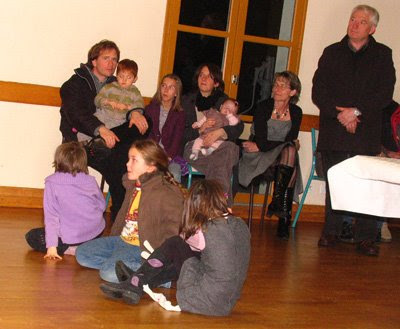 Michel Mergot had an attentive audience

The Mayor outlined a number of projects for 2009. These include the repair of the village church that dates from the 11th and 13th century and work on assuring access to all buildings like the Mairie, Post-Office and bar/shop etc. French legislation requires that all of these 'public' buildings should be accessible to all by 1st January 2015. Other projects include finding more space in the cemetery, providing lighting to the famous Source de Saint-Aignan, the spring in the centre of the village that is credited with special healing powers for those who have skin complaints. Following protests over the noise created by the new autoroute – A85 – Cofiroute, the company that has the concession, will be carrying out a noise survey. Whether this will lead them to taking measures to reduce the noise is quite another matter. 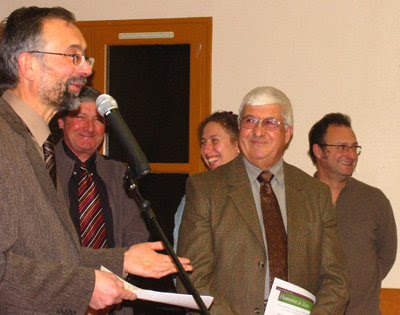 At the end of his speech Michel presented Jacky Marchau, the previous Mayor of Epeigné, with the diploma that makes Jacky, who was Mayor for 25 years and who did much to transform this small commune, Maire Honoraire. The distinction was awarded by Patrick Subrémon, the Prefet of Indre-et-Loire. 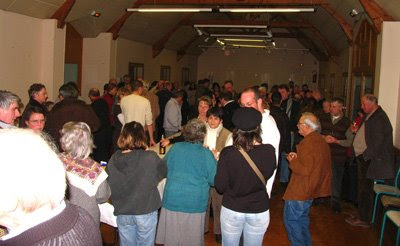 Part of the crowd enjoying the vin d'honneur, a Touraine mousseux from Jean-Claude Legrand, a local producer in neighbouring Saint-Georges-sur-Cher. The Mayor's 30-minute speech built up a considerable thirst – satisfied, of course, avec modération.