Covid-19 or Coronavirus has brought chaos to the wine world with the cancellation of Prowein, Les Grands Jours de Bourgogne, RAW London along with the postponement of Vinitaly (now 14th-17th June – will it happen?) and Bordeaux's en primeur week (30th March - 2nd April). For the moment the London Wine Fair (18th-20th May) is still going ahead but this looks increasingly unlikely with a number of European countries closing their borders along with limits on the number of people who can gather together. 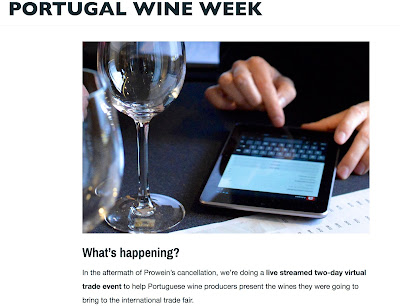 In the absence of Prowein Adegga, the Portuguese company that organises consumer wine events and  other activities, has set up a live streamed two-day virtual trade event called Portugal Wine Week  on Monday 16th and Tuesday 17th March.

"In the aftermath of Prowein’s cancellation, we’re doing a live streamed two-day virtual trade event to help Portuguese wine producers present the wines they were going to bring to the international trade fair.

Aimed at you, the trade from around the world (importers, sommeliers, retailers, etc), the digital event consists of a series of interviews with dozens of wine producers, hosted by André Ribeirinho as a Portuguese wine correspondent and including some guest speakers."

I continue to be impressed by the creativity and inventiveness of the trio that run Adegga. Portugal Week is such an example of thinking creatively and realising the positive possibilities of social media and the internet.

Yes the spread of Covid-19/coronavirus is a crisis but it is also presents an opportunity and incentive think differently and to look for and find alternative solutions.

I hope Portugal Week will be a success and will assist Portuguese producers, who will have missed out on the potential opportunities that Prowein 2020 would have offered.

Article by Richard Siddle on Portugal Wine Week in The Buyer.

Declaration:
For the sake of transparency I am good friends with the three people who run Adegga – André Cid, André Ribeirinho and Daniel Matos – and have attended their Adegga Wine Market events without charge. Adegga has not requested that I write this post nor are they aware of this post. I have no commercial interest in Adegga.

Having cancelled my place at the Concours Mondial de Sauvignon Blanc, which was held in Blois in the latter part of last week, on Saturday night we tried an old bottle of Henry Marionnet's latish harvest M de Marionnet. 1992 was not a particularly auspicious vintage – large volume due to many vines having a year off due to the 1991 April frost and probably a number of producers not pruning hard in order to compensate for their losses the previous year. So I thought the 1992 might make an interesting apéro as we had friends coming to dinner.

As it happened Marionnet's 1992 had held up well with citric and honeyed aromas, good concentration of ripe fruit and some sweetness on the palate but with enough acidity in the finish to carry the richness off. We tried it again with the cheese by which time it had developed a slight mustiness, so the bottle wasn't finished. However, when we finished it on Sunday the slight mustiness had departed leaving a clean and enjoyable wine.

Nearly 28 years on, a demonstration that Loire Sauvignon Blanc has the potential to age – admittedly in this case from a later than customary harvest.