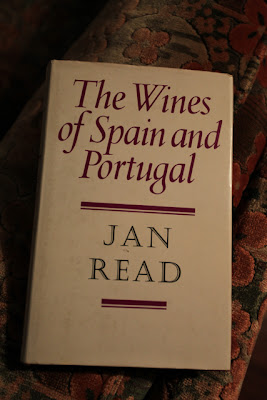 Very sorry to learn this evening of the death of Jan Read at the age 95 on 29th November 2012. Jan was well known initially for his work in films and then latterly as a specialist in the wines of Spain and Portugal. Jan's book – The Wines of Spain and Portugal (published in 1974) above – was the first book on the wines of the Iberian Peninsula that I bought and may well have been the first study of these wines in English.

See here an appreciation of Jan Read by his son, Carlos Read, and Jancis Robinson MW from her website.

Jan was one of the most senior members of the Circle of Wine Writers. Here is the notice sent to members by CWW chair Stuart Walton:

'Members will be greatly saddened to hear of the death last week of one the Circle's most senior members, Jan Read, at the age of 95. Born before the end of the first world war, Jan became, for the generation prior to the late John Radford, a formidably authoritative expert in Iberian wines, and also wrote (with Hugh Johnson) what was the first ever book on the wines of Chile as long ago as 1988. It was that latter that some of us had packed in our suitcases when we did our very first trip there in the early 1990s. He and his Spanish wife Maite Manjon wrote some of the first ever specialist Hispanic cookery books to be published in the UK, and he was also a prolific screenwriter for both film and television. His autobiography, Young Man in Movieland, was published in 2005. Jan is survived by Maite, and by their son Carlos, who works for Spanish importers Moreno Wines.'

With the death of John Radford on 19th October, we have now lost two of the leading English speaking Spain wine specialists in little over a month. Señor Gerry Dawes look after yourself please!