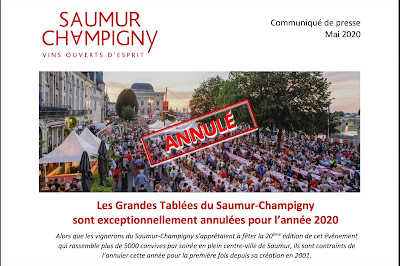 Cancelled or postponed wine events in the Loire unfortunately but inevitably keep mounting up. The latest event is the 20th anniversary of Saumur-Champigny's very popular Grands Tablées, which was due to be held on 5th and 6th August. There will, of course, be no VitiLoire in Tours at the end of May. 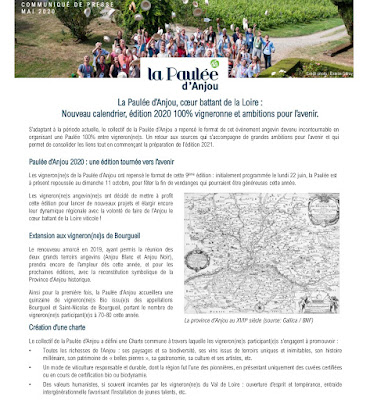 La Paulée d'Anjou
La Paulée d'Anjou due to be held in Saumur on Monday 22nd June has been postponed. Instead a much smaller version will now be held on Sunday 11th October to celebrate the end of the 2020 harvest. Following on from last year's edition that unified Anjou Noir and Anjou Blanc, which is essentially Saumur, the 2020 edition will also include Saint-Nicolas de Bourgueil and Bourgueil. Anjou Noir refers to the type of impervious rock found in Anjou: schist, slate etc., while Anjou Blanc refers to the clay limestone of the Paris Basin that is known locally as tuffeau, a soft and easily quarried limestone.

At the 2020 edition there will be between 70 and 80 domaines (compared to 53 last year) showing their wines on the Sunday morning, which will be followed by a simple lunch at midday. All of the domaines present will either be organic or biodynamic.

Because of the confinement rules limiting the number of people who can gather together, only 100, including the vigneronnes and vignerons, can attend this year's Paulée, so there will just be a few lucky and privileged guest. I am one of the lucky ones so will be reporting on the Paulée here and on Les 5 du Vin.

La Paulée 2021
A full Paulée is planned for next year – the 10th anniversary of this event.

These Paulées are the centre-piece of various projects, which will include a code of best practice along with a number of other long-term initiatives.

Other dates for your diary – Saumur: