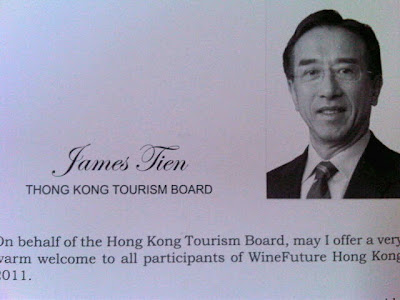 Thong Kong Tourism Board
Just occasionally one is left open-mouthed with admiration at the brilliance of an organisation ....! This I understand is the opening page to the catalogue for WineFuture Hong Kong – an event that cost a million euros to put on. Small wonder that every cash strapped and impoverished Spanish DO is beating their way to the gates of the Wine Academy of Spain in Marbella to implore Dr Pancho Campo MW and his peerless academy to come and help them, especially if he is accompanied by Jay Miller plus hopefully a spell checker...
**
Sadly I have not had any response to my enquiries about the fee that Jay Miller is due to receive for his master class in Murcia on 26th November. However, I may be able to help. We know that Miller was paid $15,000 for his master class in Navarra where the total cost was estimated to have been 100,000 euros. The total cost in Murcia is 29,000 euros, so if we assume that Miller's master class fee is a similar proportion of the total then he should be set to receive $4350 for his presentation of 12 wines. Using the same calculation he would have received $3000 had the 20,000€ trip to Vinos de Madrid gone ahead assuming that the programme included a master class by Miller.

**
Asevin's statement: 5th November 2011
Relating to the planning for the visit of Jay Miller, the emails sent by Jiménez and Teresa Torres during October are not only at variance with the above but the idea that:
'Asevin's proposal to TWA to visit Murcia arises from the interest of wineries in the area, which form part of our association, in receiving Jay Miller's opinion about Jumilla, and in learning better insight into the US and Asian markets.'
is laughable. Even given that Doctor Pancho Campo MW and Jay Miller have unrivalled insights into the Chinese and US markets respectively, they are hardly going to blow 29,000 euros on an hour long seminar. No, what the bodegas had been promised was an official visit from Miller to rate and report on their wines in The Wine Advocate.
Posted by Jim's Loire at 17:18

There's about a hundred one-liners to be had from that typo.

WineLush: I'm sure there is!