(16th August 2008: Montlouis visits with the Wine Detective)
Les Loges de la Folie on the eastern edge of the hamlet of Husseau is owned and run by Valérye Mordelet and Jean-Daniel Kloecklé. They are among the latest of the outsiders who have been attracted to set up as vignerons in Montlouis, making it one of the most interesting and dynamic of the Loire’s appellations.

We met and tasted with Valérye as Jean-Daniel, who appeared to be shy and reserved, had work to do in the winery. She explained that they had worked and studied in Burgundy and had looked for organic vines in Burgundy and elsewhere in France. Their searches brought them to Montlouis where they bought the winery buildings from one vigneron and rented vines from another. They have seven hectares, which are farmed organically, and their first vintage was 2004. 85% of their production is Montlouis, while the rest is in AC Touraine and planted with Sauvignon, Côt, Gamay, Grolleau and Pineau d’Aunis. 15% of their production is exported. 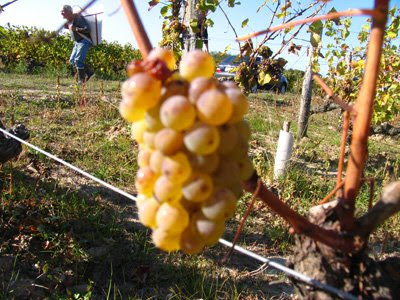 2008 vintage in Montlouis
“We both had a passion for wine but it was difficult for us to start,” explained Valérye. “We had no money and as we are not from a family of producers, we did not have family support systems that many producers have. Most of our vines are at Saint-Martin-le-Beau. For Montlouis we have two wines: Le Chemin des Loges, which comes from quite deep alluvial, sandy soils where the limestone rock is quite well below the surface, and La Nef des Fous from similar soils but much thinner, better drained soils with some flint, too, where the limestone bedrock is much closer to the surface. The vineyard also has some 100 year old vines.”

Our tasting started with their range of vin de table designed to be fun and easy drinking and without the restrictions that AC Touraine would bring. First up the pleasant 2006 Fun en bulles, a rosé pétillant naturel made from 100% Grolleau. “Initially we didn’t get the agreement for this wine,” explained Valérye. “The agreement for Montlouis is more open with differences in style accepted.” The pleasantly soft, cherry and damson 2007 Velvet is 80% Gamay, 10% Pineau d’Aunis and 10% Côt is their only red made using a whole berry, semi-carbonic maceration, so it can be drunk young. Valérye: “I adore Pineau d’Aunis. I really like the pure Pineau d’Aunis from Patrice Colin (www.patrice-colin.fr) in the Coteaux du Vendomois.”

The local name for Pineau d’Aunis is Chenin Noir and I sense that some Loire producers, especially in Touraine, are re-evaluating it and that P d’A’s stock is rising.

Although when they arrived in Montlouis Valerie and Jean-Daniel didn’t want to make sparkling, they were persuaded that it made commercial sense. Like many in the area they use Berger Elaborateurs in Saint-Martin-le-Beau to turn their base wine into sparkling. The 2006 Extra Brut has some yeastiness and is citric and austere with a lean finish. 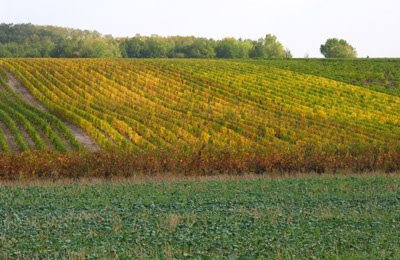 Vines between Husseau and Saint-Martin-le-Beau: early October 2005
Then onto Montlouis and four in the Le Chemin des Loges range designed to be fruity, easy drinking. The agreeable 2006 met these criteria. The 2005 with four gms of residual was clean, mineral with hints of honey and candy, while the 2006 demi-sec (22 gms rs) lacked length. The moelleux 2005 (60 gms rs) had attractive peach and nectarine flavours but was overshadowed by the fine 2005 La Nef des Fous moelleux (50 gms rs) – all honey and citrus, including orange rind, and with attractive minerality and good length. From the third passage through the vines well into October, this was easily the best wine we tasted here.

We finished with the rich and concentrated 2005 Sucre d’Ange (11% alc and 150 gms rs) – coming from the fourth passage through the vines on 31st October and made up of half botrytised grapes and half passerillage (concentrated by the sun). Just three barriques made. Valérye: “I now adore this type of wine.”

I wanted to visit Les Loges de la Folie in part because of its name and in part because it is one of the rare Loire domaines to have a lively website. I was a little disappointed by the wines. Sarah and I agreed that on the day they were the least impressive of the four producers we visited. Admittedly François Chidaine, Stéphane Cossais and Jacky Blot provide a tough challenge. Also because some of the range was sold-out, we only tasted one of their top wines – La Nef des Fous 2005 – and it was impressive.