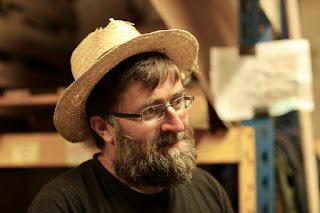 Yvan Bernard outside his caveau in Montpeyroux 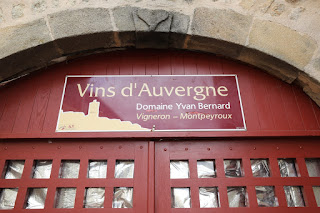 CRM, Wink Lorch, Lyn Parry and I spent three nights in the Auvergne visiting some producers in a small but an increasingly interesting wine region.

Our appointment with Yvan was for 4.30pm. When we arrived his caveau in Montpeyroux was closed, so we phoned his mobile. Yvan was in the vineyards and soon arrived. Initially we spent some time in front of his caveau with Yvan talking about his history and how he works.

He now has 8 hectares of vines in a number of different parcels – some in Montpeyroux and a parcel in Boudes. He has 1.20 ha of Chardonnay, 2ha Pinot Noir, 0.5 Syrah and the rest is Gamay.

Yvan doesn't come from a family of vignerons. Although his grandfather, who was a coal miner, had some vines he only made wine for the family's own consumption. Yvan studied marketing. However, in 2000 he decided that he wanted to become a vigneron, so started studying in Beaune. The following year he studied oenology and did a stage in Brouilly (Beaujolais).

Then in 2002, when Yvan was 23 years old, the maire of Montpeyroux offered him his current caveau, which is classified for its historic interest and belongs to the commune. At the same time he acquired some vines, which were in a very bad state and included some Gamay as well as some hybrids. Yvan now has 8 hectares of vines, which are all organic apart from his parcel in Boudes. In addition to Gamay he has Pinot Noir, Syrah, Chardonnay and has planted some Aligoté as well as some Côt (Malbec) as an experiment.

From the start Yvan had wanted to be organic but waited until 2007 when he was ready to start the conversion process gaining certification in 2010. He will soon be moving to biodynamic viticulture.

Yvan has outgrown his cramped premises in the centre of the picturesque and historic village of Montpeyroux and will soon start building a new winery in the vines outside the village, which he expects to complete in 2022.

Yvan talked about the wine history of area compared to the present when there is between 400-450 hectares planted with vines grown between 300 and 550 metres.

"Before 1870 there was a lot of Pinot Noir planted but with the huge surge in demand because of destruction wrought by phylloxera elsewhere in France, Gamay was planted because it was easier than Pinot Noir. There were 55,000 hectares planted in the Puy de Dôme départment and neighbouring areas before phylloxera arrived here late in 19th Century. Because of the demand in Paris and elsewhere there were fortunes made from wine. There were ports on the River Allier to transport wine towards Paris."

"Unfortunately the Auvergne vineyards did not recover from phylloxera. Quality dropped during the boom times, so the region gained a bad reputation. Producers here were slow to graft, while at the same time industry arrived in particular the Michelin tyre factory, so people moved away from the land."

"The renaissance here started during the 1990s when producers recognised that they had to up the quality of the wines made here. Over the last seven or eight years our wines have become more fashionable helped by the natural freshness and acidity in our wines unlike wine from regions like Languedoc, where alcohol levels are now high with low acidity. At this time we were one of the VDQS vineyards."

(This category, which was created in 1949, ceased to exist in 2011 and almost all the VDQS's were promoted to appellation status.)

"We then had 25 different crus, which was far too many for the INAO when we applied to be promoted to appellation status, so we had to choose those with a real identity. Now have just five crus – all for red wine except for Corent, which is only for rosé."

Unfortunately the 2019 vintage in the Côte d'Auvergne was very small due to spring frosts, hail and drought. Last year Yvan only harvested 50% of a normal crop due to April frost and drought, August and September were particularly dry. Some of the soils, especially the sandy ones, here do not retain water unlike clay limestone, so are very susceptible to drought.

Yvan: "We have three main types of soil here in the Côtes d'Auvergne: clay-limestone, volcanic over limestone and lava flow." 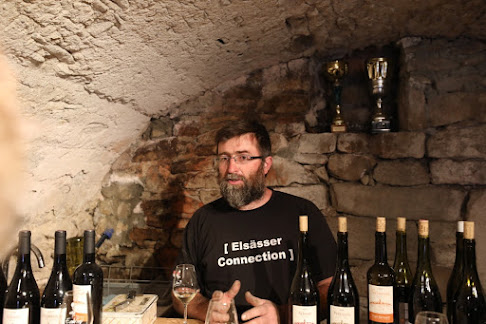 Yvan Bernard in his tasting space in Monteyroux


Tasting: We then had a comprehensive tasting of Yvan's wines. I was impressed by his wines – it was certainly one of the best tastings we had in our three-day visit to the Auvergne. Here are my favourites: 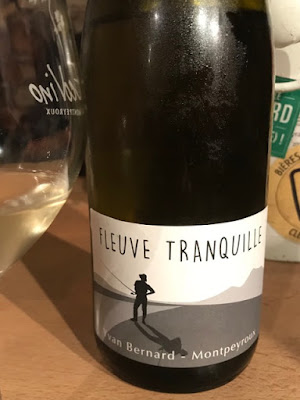 2019 Fleuve Tranquille, VDF, 100% Aligoté 12.5% alc 10€
This was made from grapes bought in Burgundy as although Yvan has recently planted some Aligoté it won't be in production until next year when he plans to make a Chardonnay/Aligoté blend from vines on basalt.
Bottled in February this is crisp and refreshingly lemony with an attractive texture. A good apéro or with shellfish. 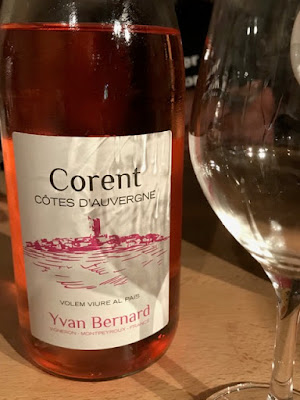 2019 Corent Côtes d'Auvergne Corent 7.70€
Made from old vine (between 40 and 100 years old) Gamay d'Auvergne, which has large, tightly compact bunches and keeps its acidity. This is pressed without any maceration (pressurage direct). A crisp rosé with attractive weight and freshness. Overall I was impressive with the rosés we tasted on our trip, especially those from Corent.

2019 Les Dômes Côtes d'Auvergne 8€
Yvan's first red is a blend of 90% Gamay with 10% Pinot Noir. Mid-plum colour with notes of violets, good concentration and texture but with some refreshing acidity in the finish. A bottle to enjoy with friends. 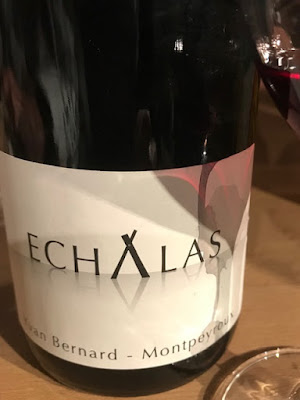 This is Yvan's non-organic vineyard on red clay. 100% Gamay and made from low yielding old vines, it has attractive peppery, red fruit notes and good mouth-filling texture. 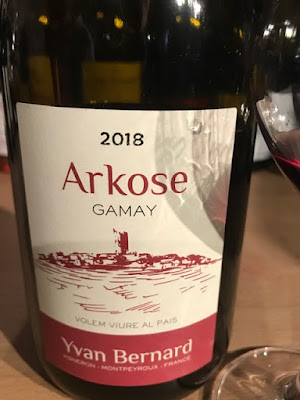 2018 Arkose, Côtes d'Auvergne 12€
From old vine Gamay in Montpeyroux planted on granite with very low yields – 20 hl/ha. This is bottled without the addition of sulphur. Dense and quite deep colour this is a very concentrated Gamay with soft black fruits, complexity, structure and long finish. A decidedly impressive Gamay.

•
We also tasted 2019 Banlieue Rouge VDF made from Gamay St Romain bought in the Côte Roannaise to make up for the very small harvest of 2019, the 2018 Les Terrases IGP (100% Syrah) and two vintages (2018 and 2015) of Petrosus (Latin for Montpeyroux and 100% Pinot Noir).
I will be posting more reports on the visits we made during our three days in the Auvergne. 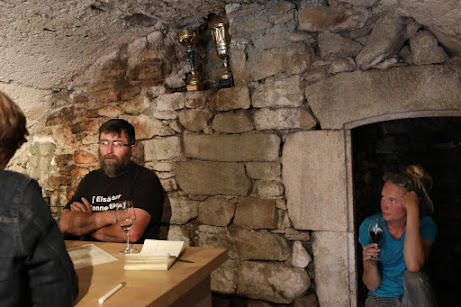 Yvan and his vineyard worker