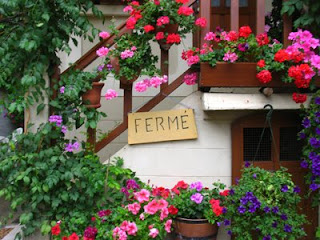 The Cotat tasting room. I would have liked to take a picture
of François but he prefers not to have his photo taken.

(11th August 2008: Sancerre)
A fairly early start from Touraine saw Sarah and I arrive in Chavignol around 11.30am. The weather was far from summery – showers and well less than 20˚C. Our first appointment was with François Cotat. This had been arranged through Richards Walford, Cotat’s UK agents. François had forgotten but fortunately was busy working in his cave, so we were able to taste with him.

François Cotat’s father, Paul, and his brother, Francis, used to work together. However, in 1998 their respective vineyards were separated out. Now François looks after the four hectares that belonged to his father, while his cousin Pascal Cotat, now based in Sancerre, has 2.5 hectares. François has vines on La Grande Côte, the Cul de Beaujeu and the Mont Damnés on very steep clay-limestone slopes around Chavignol. He also has a parcel of young vines on the caillottes between Chavignol and Sancerre on lower, more gently sloping land. The caillottes is pure limestone with little or no soil. François made his first vintage from these vines in 2005. There are 8000 vines per hectare – higher than the more normal average of 6500 vines per hectare – with an average yield of 60 hl/ha. François uses the natural yeasts, no debourbage (must settling), no sulphur during fermentation and only one battonage (lees stirring) after the fermentation has finished.

We started with the quite austere, nettley and mineral 2007 Jeunes Vignes. Then onto the richer, more concentrated 2007 Mont Damnés with gooseberry notes from 25-year-old vines. Next was the rich and Cul Beaujeu 2007. The soil in Cul de Beaujeu has more clay than the more limestone soils of Les Monts Damnés. This leads us into the stand-out 2007 – La Grande Côte. Powerful and citric with a lot of concentration, this needs plenty of time to show its best. Indeed the Cotat wines all benefit from time in bottle and generally age magnificently. “The wines need time to express themselves,” says François.

Sarah asks François what type of clones he uses. “I’ve no idea,” he replies.

We taste some older vintages. The rich 2000 Monts Damnés with floral and peach flavours and mineral length in the finish. Followed by a very fine 1995 Cul de Beaujeu again rich but this time with grapefruit and pineapple to the fore. The 1989 Grand Côte had notes of white truffle and liquorice. 15% in this very hot year. We finished with 1995 demi-sec – type of late harvest style harvested on the 20th October. Although it has good balance and finesse I prefer the dry styles. “Before 1936 a lot of the wines made in Chavignol were demi-sec,” explained François, “because of the difficulty of fermenting very ripe juice to dry. Nowadays cultured yeasts are used in 90%-95% of Sancerre wines. 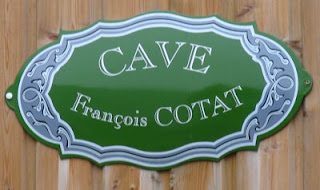 From time to time the Cotats have had problems with the French wine authorities. The name Chavignol on their labels used to be printed substantially bigger than that of the appellation Sancerre. In 1998 and 2002 their wines didn’t get the appellation because too much residual sugar remained in the finished wines. They had to be sold as vin de table. Unsurprisingly this made no difference to sales – people buying Cotat are buying Cotat irrespective of the appellation. That the 1998 Cotats took the first three places in a Wine Spectator tasting doubtless helped as well.

However, the story of these wines refused the appellation may well not be clear-cut. When I saw Denis Vacheron, who is president of the Union Viticole Sancerroise, on Wednesday (13th) he explained that there had been a declaration of chaptalisation. Sancerres that have chaptalised must be fermented to dry and cannot have residual sugar if they are to obtain the appellation. Needs further investigation.