(The second of my weekly posts on the 2012 Loire vintage first posted on Les 5 du Vin on 2nd October.)
We spent two days in the Pays Nantais last week visiting all of the three zonal Muscadet appellations where the 2012 vintage is now well underway. I nearly said 'full swing' but as the harvest really is, with a few exceptions, tiny – 'full' – is misleading. Hervé informs me that Président Hollande serves Muscadet at receptions at the Elysée Palace. Unless the Président cuts back on entertaining in 2012 a significant proportion of the 2012 vintage will be consumed there in the corridors of power. 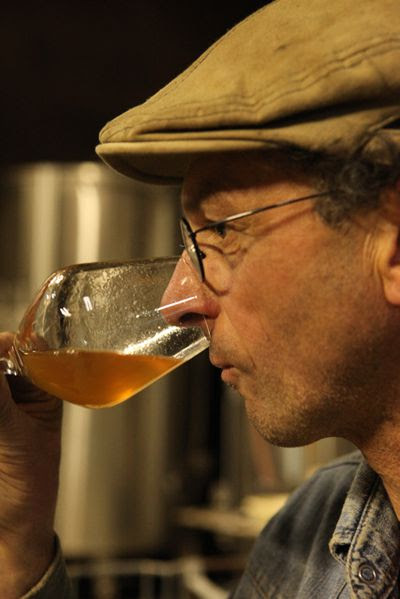 Our first visit to Vincent Caillé (Domaine de Faye d'Homme) in Monnières set the scene. "We started last Thursday. In one parcel we had just 7/8 hectolitres per hectare. It is really depressing to work all year and end up with such a small crop. Once everything is harvest the average yield I expect will be between 15-25 hl/ha."
The only bright spot is that the quality of grapes is excellent with little or no rot plus a good balance of fruit and acidity. There is, however, one caveat – the potential alcohols are high: up to 13.5% and possibly higher. This is not a problem for the high quality crus commmunaux but won't fit the traditional style of Muscadet enjoyed as a partner to oysters and fruits de mer. Of course not all the potential degrees are as high as this but certainly many are over 12% – bad news for purveyors of sunshine in the north of France!
If average yields in Muscadet Sèvre-et-Maine are likely be between 15%-30%, then they will be even lower in Muscadet Côtes de Grandlieu where April frost is an additional factor. This is in addition to damage caused by the wet April, the long and difficult flowering in June, causing a lot of coulure and millerandage (hen and chicken). Everywhere the bunches are small. Furthermore because of the dry weather through August and much of September there is little juice in the berries, so even lower yields than anticipated before picking began. The showers of the last week will have helped a bit – swelled the grapes and provided a little more juice. However, the weather is now dry again at least until Tuesday or so of next week, so not much change. 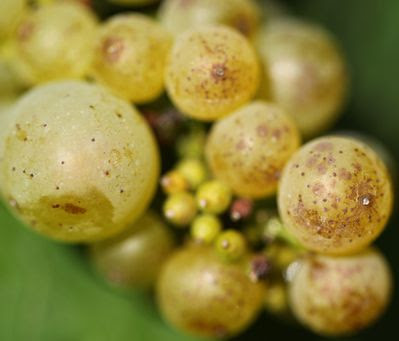 2012 Melon: opnely spaced grapes with some undeveloped grapes
Picking his frost affected La Butte vineyard Eric Chevalier (Domaine de l' Aujardière, St Philbert-de-Grand Lieu) was getting only 11-12hl/ha from his old vine Melon but hoping to end up with 25hl/ha overall but this will include his vin de pays Fie Gris and Pinot Noir.
Across at Bouaye on the north west of the Lac de Grand Lieu, Jérôme Choblet (Domaine des Herbauges) estimates that he will end up with between 15-18 hl/ha but fears that it will be closer to 15 than 18. Jérôme reckons that he has enough stock of 2010 and 2011 to supply his customers. Unfortunately anyone starting out is unlikely to have this luxury, the tiny vintage is all too likely to force some producers just starting out into either bankruptcy or abandoning both their vines and their dreams. 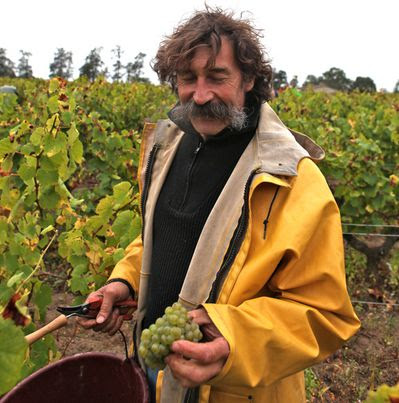 If Joseph's Landron's vines were as bountiful as his tache he would be a happy man!