A new study casts doubt on the widespread belief that the use of Roundup is not harmful to human health. The study looked at 'adjuvants' – often called inerts that help the active component in the pesticide or herbicide to work more effectively.

Brief quotes from the study: ‘Pesticides are used throughout the world as mixtures called formulations. They contain adjuvants, which are often kept confidential and are called inerts by the manufacturing companies, plus a declared active principle, which is usually tested alone.’


‘Adjuvants in pesticides are generally declared as inerts, and for this reason they are not tested in long-term regulatory experiments. It is thus very surprising that they amplify up to 1000 times the toxicity of their APs in 100% of the cases where they are indicated to be present by the manufacturer (Table 1). In fact, the differential toxicity between formulations of pesticides and their APs now appears to be a general feature of pesticides toxicology. As we have seen, the role of adjuvants is to increase AP solubility and to protect it from degradation, increasing its half-life, helping cell penetration, and thus enhancing its pesticidal activity [32] and consequently side effects. They can even add their own toxicity [1]. The definition of adjuvants as “inerts” is thus nonsense; even if the US Environmental Protection Agency has recently changed the appellation for “other ingredients,” pesticide adjuvants should be considered as toxic “active” compounds.’


‘It is commonly believed that Roundup is among the safest pesticides. This idea is spread by manufacturers, mostly in the reviews they promote [39, 40], which are often cited in toxicological evaluations of glyphosate-based herbicides. However, Roundup was found in this experiment to be 125 times more toxic than glyphosate. Moreover, despite its reputation, Roundup was by far the most toxic among the herbicides and insecticides tested. This inconsistency between scientific fact and industrial claim may be attributed to huge economic interests, which have been found to falsify health risk assessments and delay health policy decisions [41].’ 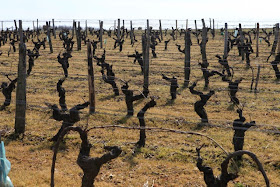 A sad Touraine vineyard blitzed
with herbicide: late March 2014
Not only sad but a danger to human health?

Not only does the widespread use of herbicides destory biodiversity but if recent studies are correct they pose a threat to health not only to the people working in the vineyards but also consumers of wines from vineyards treated with herbicides.

It is often thought that just using herbicides between the vines and grassing over or cultivating the middle of the rows is more acceptable as this is only a limited use of weedkiller. However, if herbicides with their inerts are indeed toxic this may be a grave error as the herbicides may well leach down to the vine roots with the possibility the toxicity will later appear in the grapes and so into the resulting wine.