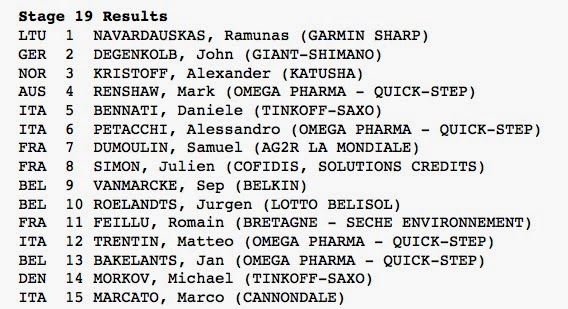 Ramunas Navardauskas and his Garmin Sharp team earned a finely crafted victory in Bergerac this afternoon. Navardauskas attacked on the Côte de Monbazillac catching his team mate Tom Slagter, the only survivor from the day's break. The Lithuanian time trial champion then sped away opening a gap on his chasers of around 20-25 seconds.

The race was run in foul conditions – heavy rain and plenty of standing water on the roads. This gave Navardauskas an advantage over his chasers in the difficult, technical finish – as it easier to negotiate wet corners alone than with a group. His cause was further assisted by a crash in the front of the peloton inside the last three kilometres, which took out a number of riders including Peter Sagan who looked to have targetted this stage as one he could win.

On the line Navardauskas managed to hold off the small group of chasers led by John Degenkolb, Alexander Kristoff and Mark Renshaw by seven seconds for his first individual Tour de France stage win. Navardauskas already had a Team Time Trial stage win with Garmin in 2011 – see amended overall list of stage winners. He also won a stage in the 2013 Giro.

Although the crash delayed some riders by a good number of minutes, there was no change overall as the crash happened within the last 3 kilometres of the stage, so all the riders, except Navardauskas, were given the same time for this stage. Fortunately the forecast tomorrow is dry and sunny, so hopefully everyone will have an equal chance in the time trial, which will indeed be the race of truth for those with ambitions for the podium.

Jim, you must admit I’ve been a very good boy indeed during the whole length of this TdF: not a single nasty comment. On top of that, your predictions – I was forced to read them as I was still following your coverage of everything winey in-between – have very often been correct. You are a clever pharmacologist !
No, my point is: French Catalonia is rugby-county (both rugbies) and not many people will even mention bicycle racing. But, when they do, they hope for Frenchies on the podium, as you mention. My very own Lev Davidovitch was more of an internationalist, as you know, and I myself don’t feel any “national” pride at all. This being said, how come people – the British as well – so easily identify with fellow-countrymen in sport ? It is as if their performance would reflect on them all. Is it I who lacks some type of emotional capacity ? What kind of difference do my frontal lobes exhibit? Or is it just I don’t follow the “panem et circenses” model, but rather the “vinum et jazzmusic(e)s” one?

Luc – you have indeed been well behaved! It's a good question why do people support particular teams. particular sports stars or their country, especially when doing well at sport.

You will be pleased to know that the Bergerac time trial has started with Ji Cheng the first starter. I am happy to predict that he will not win the stage.