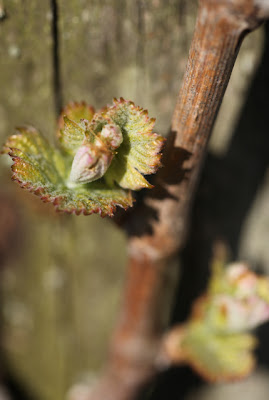 Here in Touraine the continuous blue sky, sunshine and high temperatures – often up into the low 20s˚C even sometimes mid-20s – over the last fortnight has accelerated Spring's arrival. The vines have caught up any delay caused by the extremely low temperatures in the early part of February when the mercury dropped to minus 18/19˚C. Buds have now burst and there are signs of leaves coming out, particularly for early varieties like Chardonnay or Arbois.

The worry as always with an early start is the damage a frost could do. Certainly the danger will last the whole of April and, to a lesser extent, into the early part of May. Recently the really damaging frosts have been in April, for instance 1991 (21st/22nd) and 2008 (6th/7th). Nerves jangling and fingers crossed for the next month.

I'm not sure whether 2012 is now ahead of 2011 as I'm getting mixed reports from producers. It is, however, interesting to compare this year's March weather stats (Tours) with those from last year.


Clearly both 2011 and 2012 are far from the norm – much more sunny, hotter and certainly drier than the average. To date 2012 has had more sunshine and higher March temperatures than 2011 and even less rain! Fortunately December 2011 was wet and well above the average with 135mm but still everything is now becoming very dry and no significant rain forecast until the middle of next week.


A warm early start doesn't necessarily lead to a good vintage: sometimes it is early good and early rotten. 1987 was lovely in April but went downhill rapidly after that. Similarly 2007 was warm and sunny over Easter, then led to a wet summer and was only saved by a fine September and October. Furthermore last year's fine start through to mid June or so was followed by a cool, wet July, a variable August and a wet early September leading to a complicated vintage.

Would you be able to share your source for these weather statistic ?

Hi Anon. I should have given the source of the figures. Link now on post it is the Tours weather station on the MétéoFrance site.