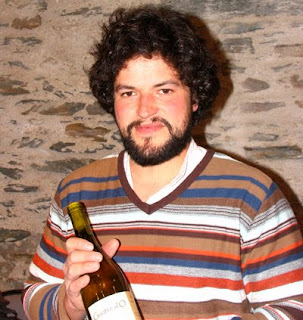 Sylvain Martinez with his 2008 Goutte d'O
I was very impressed with Sylvain's 2007 Goutte d'O (100% Chenin) when I tasted it in the UK, where it is imported by Les Caves de Pyrène, so it was good to meet him at the Renaissance tasting in Angers (31st January).
Sylvain is very much a 'boutique' producer with just two hectares of vines and is based in Chemellier in the Aubance between Brissac-Quincé and Saint-Georges-les-Sept-Voies. On tasting the 2008 Goutte d'Or I'm a little less convinced than I was with the 2007. The nose is more oxidative, although the taste is clean and long. I expect I will probably get the chance to taste this again at Les Caves tasting in London next month.
Traditionally Grolleau Noir has been the major component of Rosé d'Anjou but there are a number of the 'Renaissance style' producers making their Grolleau Noir into a red wine. I tasted Sylvain's 2009 Grolleau Noir, which is not yet in bottle. It has some attractive, ripe fruit – typical of 2009 – but is a bit rustic, which tends to be a characteristic of Grolleau Noir. Will be interesting to taste this once it has been bottled. Nothing wrong with a bit of rough trade – who needs sophistication all the time!
Sylvain Martinez
13 Rue de la Croix Moron, 49320 Chemellier
Tel: 02.41.68.48.41

What a coincidence! Last night I went to the cellar to pick a bottle of white wine and ended with a bottle of Le Goutte d'Or 2007 that I purchased last october.

An interesting wine, and one that shows where Sylvain has done an stage (according to what I have read on the internet).

Really turbid, with plenty of particles in suspension, it starts a bit reduced and with some offputing aromas but they dissipate and it drinks quite well. Liked the lemony finish.

I am not very fond of natural wines, specially if they have to travel, but this wine was an exception. It drinks very easily.

Sadly, my only bottle, but since I plan to go back next october, will try to buy a few more.

That said, it is nowhere near the quality of Stephane Bernaudeau wines. Was he at Greniers St. Jean this year?

Oh, well, it was here where I read about Sylvain doing a stage chez Angeli. In fact, I arrived here looking for information on his 2007 wine and I have just noticed! Sorry for that.

pisto. Thanks for your comments. Surprised the 2007 was really turbid as it wasn't the case with mine. May be there is considerable variation between bottles – not a very good sign.

Yes Stéphane was there and I liked his wines very much and will be posting on them as soon as possible.