Founded in 1885 Langlois-Chateau has been Champagne Bollinger's outpost in the Loire since 1973. They were the first significant Saumur sparkling wine house to dropping Saumur mousseux for the more rigorous rules of Crémant de Loire. I recently received three wines from the L-C stable to taste: 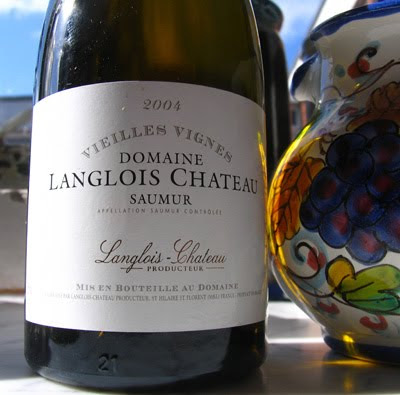 Last evening I tasted the 2004 VV Saumur and the 2007 Saumur-Champigny and tried them with with papillottes of salmon* – the fish on a julienne of vegetables – with each parcel moistened with a little of the white Saumur before cooking them quickly in a hot oven just to the point when the salmon was slightly underdone but wonderfully juicy. 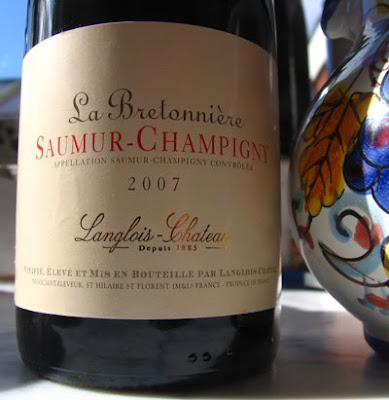 The barrel-fermented Langlois Vieilles Vignes can be one of the best Saumur Blancs. The 2004 may yet be but at the moment the oak, at least initially, is too dominant although underneath the oak there is good depth of flavour. Even though I decanted the VV to let it open up, the oak clashed with the fish. Instead it was La Bretonnière, lightly chilled, that was the better match with the dish. This 2007 is leafy, herbal and quite light entirely in the style of the vintage and it worked well with the salmon. 2007 is just the sort of Loire vintage where the reds can be a very good match with fish, particularly strong flavoured and meaty types like salmon, tuna, swordfish and sea bass. I'd drink this 2007 in the next couple of years. Best served cool cellar temperature, which in modern flats and houses means a short spell in the fridge. 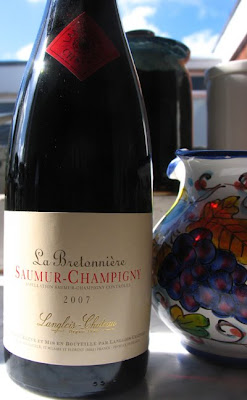 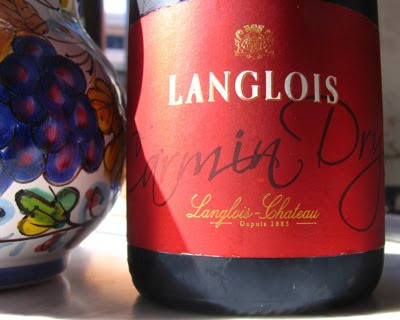 Carmin Dry is an attractively foamy red full of blackberry and blackcurrant fruit. A couple of glasses make an attractive aperitif, otherwise Langlois suggest drinking it with a red fruit dessert. I take the Dry in the Carmin name to mean dry in the sense that this is sweeter than brut. Certainly there is a marked touch of sweetness – at the level of sec-tendre or a lower level sweetness of demi-sec. A red sparkling wine without quite a high level of dosage is thought to be too acid and tannic – echoes of red Vinho Verde!

Trying the remains of the 2004 VV this evening the oak has moderated and a mineral Chenin character is now coming to the fore. I'd suggest that the 2004 really needs another couple of years in bottle to give the oak time to fully marry and realise its potential – alternatively decant a number of hours before drinking.
Samples kindly supplied by Mentzendoff.
* Fish from Moxon's – a very good fishshop in Lordship Lane, East Dulwich SE22.
Posted by Jim's Loire at 17:32

Jim, glad to hear that you managed to track down the Carmin. I think I originally tipped you off when it showed up here in Alberta!?
I still have 2 bottles of the `02 Saumur VV. Not sure how much longer to cellar?

Morning Bob. Yes I don't remember tasting Carmin Dry before. You could probably cellar the 02 at least 10 years if you wanted to.

I tasted the Carmin Dry over Xmas. Lovely wine, cannot add too much to Jims thoughts altho` I found some pomegranite on the finish.Good with pork scallopini, asparagus and gratinee pots.