Keith Prothero considering the 1989 Clos de la Dioterie, Charles Joguet
Had a very agreeable lunch with Keith Prothero, who is involved in various charity (just giving) and wine projects including the Pebbles Project, Mullineux Wines and is an investor in the award winning The Sampler. 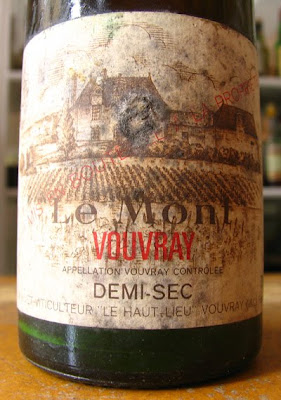 Apero: 1976 Le Mont Vouvray demi-sec, Domaine Huet
This is one of the remaining bottles that we bought during one of several visits to Domaine Huet in the early 1980s. We bought a number of 1976s – mainly moelleux. Many of them have had problematic corks – not corked but not well sealed so several of them have been quite ullaged. One, indeed, that we tried about a year to 18 months ago was only two-thirds full. Nevertheless I pulled the cork, fearing the worse, and was amazed that it was still fine and not oxidised.

This demi-sec was less ullaged – high shoulder – but was probably more affected. A question of being demi-sec rather than moelleux, the higher level of sugar providing greater protection? Mid to deep gold with definite notes of oxidation on the nose; on the palate this still has that wonderful balance of honeyed fruit and acidity that makes Huet's wines so thrilling. Slightly baked fruit – a reminder of how hot and dry 1976 was. (In the UK Denis Howell was famously appointed 'Minister for Drought' whereupon the skies opened a few days later!)

This being a déjeuner de la modération Keith and I kept some of the 1976 to try later on – it worked well with my linguine and crab and, a while later, with the blue cheese. I had put it in a carafe and over the course of a couple of hours or so it opened up and certainly didn't become more oxidised, although I do think that due to the ullaging it wasn't as good as it might have been. Nevertheless memorable. 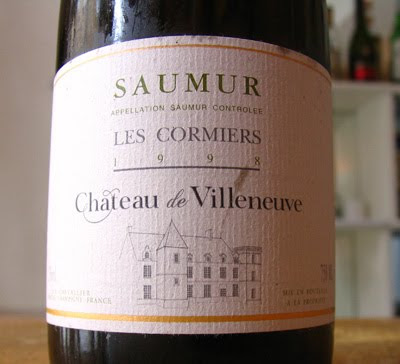 First course: 1998 Les Cormiers, Saumur Blanc, Château de Villeneuve
Les Cormiers is Jean-Pierre Chevallier's top cuvée of Saumur Blanc, vinified in 500 litre barrels with a proportion of new oak. JP is always keen to keep Chenin's acidity, so there is no malo here. The 1998 is an interesting contrast to the 1999, one of JP's really great Les Cormiers. The 1999 is much richer, creamier, more flattering than the 1998, which was a difficult year with a wet and cool September. The quite austere 1998 reflects this with precise minerality – still very youthful. Tasted blind it would be difficult to divine that this wine is now nearly 11 years old. Worked well with both Keith's quiche and my linguine and crab. 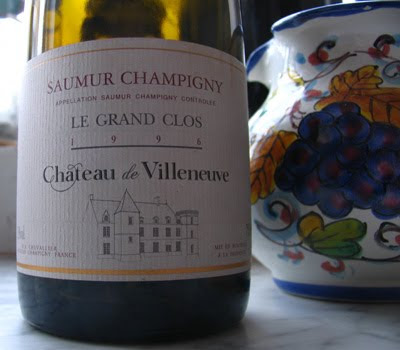 I'm a great fan of 1996 Loire reds – a really classic vintage – and I think Jean-Pierre Chevallier's Grand Clos is one of the finest examples of the vintage. It has the typical Loire Cabernet Franc herbal character with touches of sous bois, rich, silky fruit and good structure and length. It shows no sign of tiring and will still be a fine bottle for several years to come. Not surprising that the 1996 Grand Clos has stunned the Bordelais on a number of occasions in blind tastings. 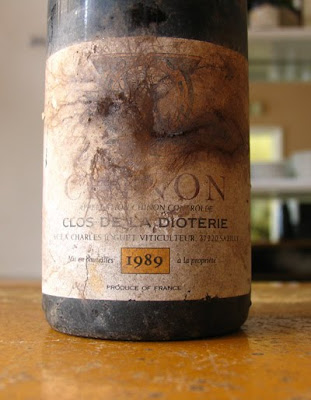 1989 Clos de la Dioterie, Chinon, Charles Joguet
Next, the 1989 Closde la Dioterie Chinon from Charles Joguet. This was made when Charles was at the height of his powers, nearly a decade before he retired, and when he was generally considered the best Chinon producer. I've had several bottles of the 1989 Dioterie and, although it had lovely silky, voluptuous fruit on the palate – closer to Burgundy than to Bordeaux – on the nose it was beginning to show its age. Initially when we opened it, it had that typical Joguet animal, kidney nose. However, it soon took on that tiring, slightly pencil shavings nose.

And the wine of the lunch: I'd have to go for the Grand Clos, although all revealed the possibilities of the Loire.
Posted by Jim's Loire at 07:58

That `96 Saumur!!
So little to choose from here in Alberta.

Even if you didn't live in Alberta Bob it is not easy to hold of the 1996. You virtually have to buy it young and keep it.

I'm afraid I'm at a complete loss as to why you are living in Alberta.

Jim, I sometimes ask myself the same question!!