La Lionnière, a dead vineyard and some interesting rainfall figures 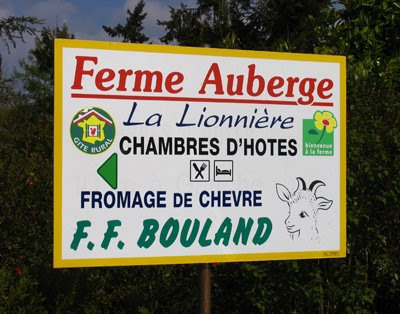 Very enjoyable dinner with friends at La Lionnière last night with the highlight being an excellent terrine made from a blend of the lamb, chicken and goat liver. The choice of main course was lamb or coq au champignons with the lamb being the better deal. A bottle of 2008 Gamay from the Clos Roche Blanche – good concentration, spice, certainly drinkable now but will be better in six months to a years time – started us off. Then we had a well made and attractive 2006 Cabernet from Jean-Christophe Mandard (Vignoble du Haut Bayneux). Someone else that I need to go and visit! 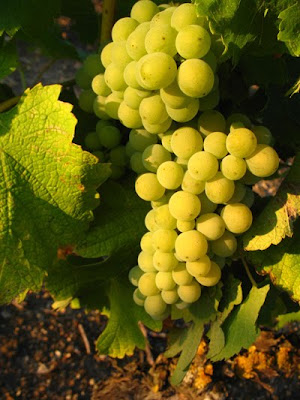 Sauvignon Blanc 2009
The La Lionnière farm is organic, which unfortunately is far from the case for the producer who owns the completely blitzed vineyard just to the north. Before sitting down to dinner I have a quick look at the vines. The grapes (probably Sauvignion Blanc) looked healthy enough apart from those being shrivel on a vine rapidly dying of Esca but the vineyard was a sad sight entirely devoid of any biodiversity. 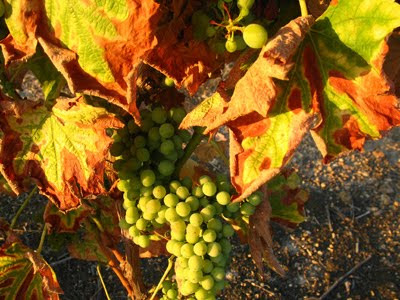 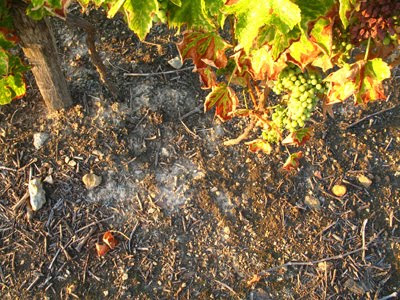 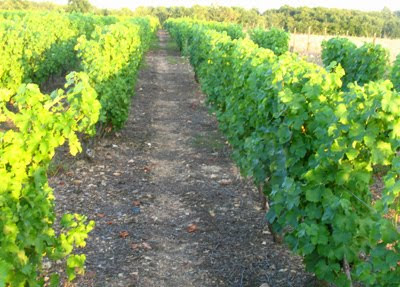 Monoculture – only vines no other life here
Driving over to La Lionnière much of the pasture was brown showing how dry it has been recently. There are some interesting rainfall figures for 2005 to 2009 (June to August) on the Living the Life in St-Aignan blog. These are recorded by Ken Broadhurst and his partner Walt.

Although we have had some hot days this August with temperatures up to 35˚C, it has been nothing like as hot as 2003 (around 40˚C). Nor has it been anything like as continuous and the nights have been much fresher – around 14˚/15˚C compared to staying over 20˚C.
Weather figures in Tours and elsewhere
Following on from Mark Robertson's comment, the Méteo-France figures show that it has hardly rained in Tours since 23rd July (1 mm recorded so far for August) and that July's total was just under 40 mm, some 12 mm below normal. June's rainfall at over 50 mm was above average but around 35 mm of that fell on Monday 8th June – a day of torrential rain. From 11th June virtually no rain fell for the rest of the month.

Thanks Mark. I'll have a look at the site. As you say it is clear that rainfall has been very variable this year. Very dry in southern Touraine and parts of Anjou since early June.

The Auberge looks like a nice spot for some relaxation and good home-cooked food. Menu seems quite appetising!

It is Bob – more goat cuisine than haute-cuisine!

Jim,
I think what's been surprising this year is the contrast in rainfall over relatively short distances. For example Veretz (10km east of Tours) had over 89mm of rain in June. This point was brought home to us on the 13th July when around 25mm fell on Epeigne during the afternoon/early evening for our Moules Frites. A number of people had come from Tours where they had not a drop of rain all day !