Apologies that there was no posting yesterday but I was away for much of the day at a celebratory lunch@The Auld Alliance in Kingussie, Scotland. The food was extremely good and the situation is lovely – above the village of Kingussie in the Scottish Highlands with great views across to the hills and mountains. Normally only open in the evening it is run by a French woman Lydie Bocquillon. It is certainly worth le detour. 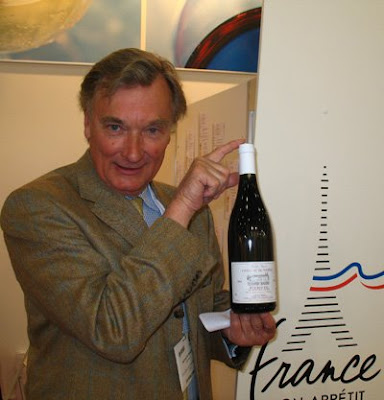 Back to catching up on wine tasted at the London International Wine Trade Fair.

The Collegiale is like an association of Loire producers, who bottle their production at their own properties, but then sell some or all of their wines through the Collegiale. This is allow a buyer to purchase a range of wines from just one pick up point. Guillaume Mordacq their director had bought a small selection of their wines to London.

I started with a rich and toasty 2005 Vin de Table Sauvignon from Château de Suronde, part owned by Mordacq. This powerful wine has 15% alcohol and was bottled in June 2007. Initially it rather overwhelmed the next wine – a 2008 Le Cep Touraine Sauvignon from André Fouassier of Lye in eastern Touraine. Fouassier has around 15 hectares – some in AC Valençay and some in Touraine. Then onto two minerally citric 2008 Sancerres both from the village of Bué: one from Pascal Balland and the other from Dominique and Janine Crochet. Both are perfectly good Sancerres with out being standouts.

Lastly I tasted the 2008 Bourgueils from Château de Minière in Ingrandes-de-Touraine. This seven hectare property was bought in 1995 by Bertrand and Evelyne de Mascarel de la Corbière. It remained in family hands, however, as he bought it from a cousin, whose ancestors had owned it since the 18th century. Bertrand also bought the vineyards belonging to Jean-Billet, so he now has 23 hectares in Bourgueil. The winemaker is Daniel Esteve, who used to be the winemaker at Château Clinet in Pomerol. Of the three tasted – Chevalier de Minière (to be bottled in May/June), Château de Minière and the Vieilles Vignes – it was the Vieilles Vignes that was the most impressive. From yields of 30 hl/ha this has rich, soft damson and plum fruit, some structure – a Bourgueil in quite a feminine style.