The twice-yearly Thorman Hunt tasting is one London event I’ll always try to get to if possible. Unfortunately their spring tasting now coincides with the Decanter World Wine Awards Judging so I have been unable to make the last couple of editions and it may be longer than that. Fortunately the tasting is likely to be moved to March in 2010. 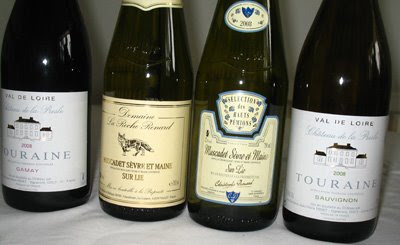 Gamay, two Muscadets and the Touraine Sauvignon
Importers Thorman Hunt was founded in 1978, concentrating mainly on individual French growers. The company is run by Jeremy Hunt. Their list of producers outside Bordeaux and Burgundy is particularly strong, especially from the Rhône, South West France and the Loire. Thorman Hunt doesn’t have the wacky element that is an integral part of Les Caves de Pyrene but it is solid and impressive producer portfolio.

As I was unable to make the spring tasting they kindly arranged to taste a few Loire’s that I picked out from those shown at the April tasting. I chose wines from producers that I either didn’t know or whose wines I hadn’t tasted recently, so, for instance, no Château Villeneuve who have long been part of the portfolio.

I started with the easy drinking 2008 Gamay Touraine from Château la Presle (Jean-Pierre Penet), Oisly. Youthful purple, warm red fruits – perhaps a little lean in the finish but a wine to enjoy chilled over a outdoors summer lunch or picnic. Sensibly closed with a screwcap, which Penet does specially for the UK market. So much more sensible than cork – real or synthetic.

Next a couple of 2008 Muscadet-Sèvre-et-Maines sur lie. The first Domaine de la Roche Renard (Isabelle and Philip Denis, Vallet) was OK but was easily put in the shade by 2008 Selections du Haut Pemions from Christophe and Joseph Drouard in Monnières, not far from Le Pallet. Also in screwcap – if there was a French wine designed for a screwcap it’s Muscadet – this has attractive lemony weight and good length. Delicious – bring on the plateau de fruits de mer!

Then the screwcapped 2008 Touraine Sauvignon from Château de Presle – initially quite rich and weighty and with good length, this needs two or three months in bottle to really knit together. “A few people have commented that it is not Sauvignon enough" but Jean-Pierre said that he picked a little bit later and this is how he wanted the wine to taste. I suspect the comments have come from people who still think that cat’s pee is classic Touraine Sauvignon. So it is if you want to drink unripe Sauvignon but if the grapes are picked when they are ripe the vegetal cat’s pee flavours will have given way to gooseberry, grapefruit and then more tropical fruit flavours. 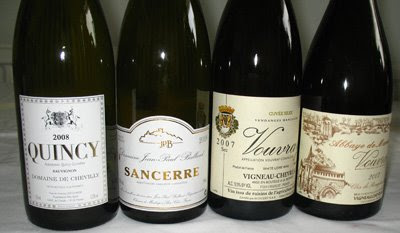 Quincy, Sancerre and two Vouvrays
The ripe and full 2008 Quincy Domaine de Chevilly (Yves and Antoine Lestourge in Méreau in the west of the appellation) is New Zealand in style with asparagus notes. The last Sauvignon was the 2008 Sancerre from Jean-Paul Balland in Bué. One of these days I ought to find out whether there are more Ballands than Crochets in the small village of Bué – but I digress. The 2008 is a vat sample but suggests that it will be quite a weighty Sancerre.

Finally a couple of Vouvrays from the 28 hectare Vigneau-Chevreau biodynamic estate in Chançay: 2007 Cuvée Silex and 2007 Clos de Rougemount, Abbaye de Marmoutier. The estate is now run by Stéphane and Christophe Vigneau-Chevreau, the sons of Michel who died of cancer last summer. I haven’t met the sons but saw Michel on a number of occasions, especially at the Salon des Vins de Loire. He was a very charming and courteous man – I often wished that I liked his wines better.

However, the sons look to have moved the wines up to another level and I particularly liked the rich, concentrated and long Abbaye de Marmoutier – probably best described as a sec tendre. It retails for around £18 a bottle. The Abbaye was founded as far back as AD 372 and was destroyed during the French Revolution. Then phylloxera at the end of the 19th century finished off wine production at the Abbaye. In 1995 Michel Vigneau-Chevreau obtained a 50-year lease on the Clos de Rougemount and started to replant. Most of the vines are grafted but there is a plot (1600 vines) here of ungrafted Chenin Blanc.

After finishing the Loires I tasted a few other bits and pieces including the austere and precise 2007 Cuvée Marie Jurançon from Charles Hours and the rich and brooding 2005 Montus Madiran from Alain Brumont.

This Touraine Sauvignon wine sees no wood and is quintessential Sauvignon Blanc with notes of quince, citrus and mineral aromatics that lead to a snappy mouth feel and endless length.i like very much this.