The main focus of this tasting held at the RSJ Restaurant, London SE1 (tel: 020-7928 4554) was on Sauvignon Blanc away from the classics of Sancerre and Pouilly-Fumé. 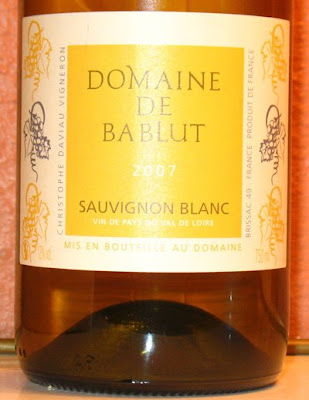 There was a welcome glass of Christophe Daviau’s Sauvignon Blanc. Coming from the western part of the Loire in Anjou this tends to be richer, rounder with an accent on tropical fruit – certainly less citric and mineral than the examples from Touraine and the Central Vineyards.

As we were a small group this evening we all sat around one large table in the basement of the RSJ. This was certainly a format that worked well on the evening with people feeling that they were able to contribute more easily to the discussion than when we have larger numbers. It may well be that this is an alternative format that we can offer from time to time, although the price may have to be a little higher to cover costs.

We started with three wines served blind. Not with the intention to challenge people to identify the wines but to answer one question – which of the three wines do you prefer. 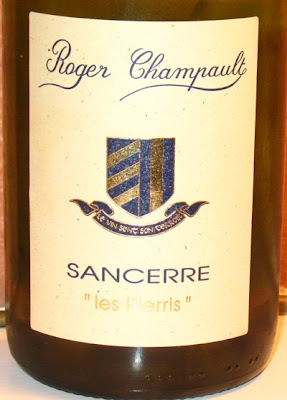 2007 Les Pierris, Sancerre, Roger Champault et fils
The Sancerre had attractive weight and richness with the wine benefiting from a year in bottle.

2008 Sauvignon Blanc, AC Touraine, Domaine Sauvète
This was quite aggressively catty aromatically – some tasters also smelt elderflower – with a lean and lemony palate.

Of the three wines there was a preference by one vote for Le Petiot followed by the Sancerre and only one supporter of the Sauvète. All of the 2008s in the tasting are likely to take on more weight over the next three to six months. Most of them have only been in bottle for a short time.

•••
Then we served the next three with the first course.

2008 Clos Roussely, AC Touraine Sauvignon, Vincent Roussely
This turned out to be the favourite Sauvignon Blanc of the evening with good richness balanced by a clean, grapefruit finish. This further confirms that Vincent is making some very good wines.

2008 Touraine Sauvignon No2, Clos Roche Blanche
Although well-balanced this has softer acidity than the other Sauvignons having gone through a malolactic fermentation.

2007 Quincy, Domaine des Ballandors
Once again we could see the benefit of a year in bottle giving the wine additional weight and texture with a refreshing citric finish.

The voting showed the Clos Roussely as the clear favourite, followed at a distance by the Quincy and then the Clos Roche Blanche. However, there was a general feeling that these three wines found it difficult against the sweetness of the red onion.

•••
We paired two Sauvignon with the main course. 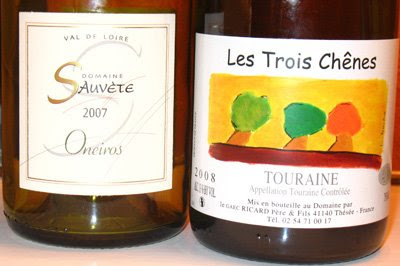 2008 Les Trois Chênes, AC Touraine Sauvignon, Vincent Ricard
Recently bottled this needs time to open up, although concentration is apparent along with a mineral finish.

In the voting Les Trois Chênes was the clear favourite with several fence sitters in this round. 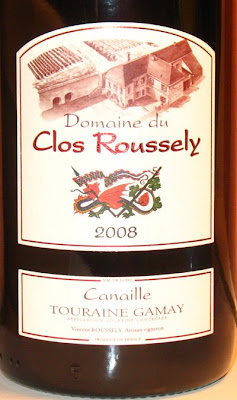 2008 Canaille, Gamay, AC Touraine, Vincent Roussely
Also tried with dinner 2008 Canaille, Touraine Gamay, Vincent Roussely. One of our frequent tasters remarked that a light red would be good with the salmon. By luck we had a bottle of Vincent’s Gamay that we had opened earlier to taste, so we were able to put this suggestion to the test. Indeed Vincent’s juicy, brightly red fruited and spicy Gamay went well with the salmon.

Conclusions?: That you don't have to stick with the established classics from the Central Loire and that there are some very good producers in Cher Valley with Vincent Roussely and Vincent Ricard being particulalry commended. Like Sancerre and Pouilly-Fumé, these wines often benefit from some time in bottle to gain more weight. The VDP Sauvignon from Domaine de Bablut was also popular.