Is 2008 really a great vintage for Loire reds?

This morning the latest update from the Project Cabernet Franc plopped into my mailbox. It includes an assessment of the 2008 Cabernets from Sam Harrop MW: 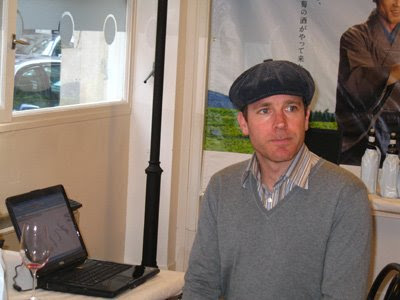 ‘The goal of encouraging producers in the same region to work together might seem fairly rudimentary, but when it comes to the Loire – a region so rich in history, tradition and vignerons with great independence and pride – it is no mean feat! However, the unarguable progress made in guiding vignerons towards a more balanced and, arguably, more export-friendly approach, has been well worth the effort. Having just returned from the 2009 Ambassadors Selection, where I judged with a rigorous panel including Jim Budd, Jane Masters MW, Emily O’Hare, it is clear that the better examples from vintage 2008 are well above average, if not exceptional. In a year when vignerons could have been forgiven for leeching every last tannin molecule out of the seeds and skins, restraint was the rule not the exception! It seems that having freed themselves from the shackles of Bordeaux, the Loire is forging a new identify, championed by a host of fresh, dynamic winemakers.
They say most great years follow a challenging growing season, and 2008 in the Loire is a year that supports such an assertion. After a frosty, wet and cool start to the season and a very late veraison (oh and did I mention there was a hail storm early on as well); in mid September things were looking a tad hairy. Towards late September/ early October however, with the winter weather staying away, things had started to look a little brighter. For the most part the dry conditions allowed growers to leave fruit on vines in an extremely good condition well into October. This hang-time enabled flavours and phenolics to reach adequate maturity, and with the smaller crops and berries - a hallmark of the 2008 Cabernet Franc vintage - concentration was on target to impress. And impress it did!
Of the 86 wines tasted at the Ambassadors Selection (29 were 2007’s, 57 were 2008’s); 24 Ambassadors were selected. The turn-out of 2008 wines was a little disappointing, as was the fact that a number of them had to be rejected due to less than optimum condition (e.g. still in tank). On the upside however, with elevage and polishing before bottling, some of these wines showed the characteristics of real longevity. If resubmitted next year, I’d be willing to gamble that many will be a shoo-in for the 2010 Selection. But let’s wait and see. Of the 24 wines selected, six were 2007 (21 percent of total 2007 wines entered) and 18 were 2008 (32 percent of total 2008 wines entered). It is widely known that 2007 was a lighter vintage, and while there were some stand-out wines set to improve with age, in general terms 2007 wines should be enjoyed in their youth.
In my view, to date, 2008 has been the best vintage of the decade. Only time will tell if it has what it takes to be an all time classic, but the early signs look positive. The better examples (from producers who left fruit on the vine until mid October, and did not over-extract in the winery) have the typical freshness and typicity of the Loire, but without the green, sappy herbaceous notes that so often stain Cabernet Franc’s good name. These wines have the concentration, weight, supple tannic profile and moderate acid levels to not only help balance the wines, but to enable them age with grace. There is a harmony to many of the wines already and while they will unquestionably get better with age, most will be ready for drinking not long after bottling. The enigmatic, perfumed qualities, dark red fruits and wonderful definition that make Cabernet Franc so special, are present in abundance in the 2008 vintage. Be sure to stock up your cellars!’ 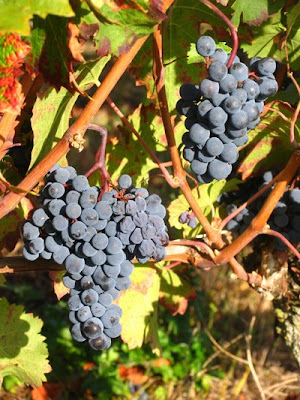 Early October 2008: Cabernet Franc@Souzay-Champigny
I’m not sure I’m yet prepared to go along with Sam’s assessment that ‘In my view, to date, 2008 has been the best vintage of the decade’. Certainly it is way better than one might have feared during the cool and drab days of August, although the Loire was fairly dry compared to other parts of France like Bordeaux. The 2008 vintage also benefited from cool temperatures during the sunny months of September and October giving long slow flavour maturation, while a blast of autumnal heat might well have raised the sugar levels too quickly and left the grapes not ripe.

But are the 2008 reds really better than 2005 and some 2006s? Still rather too early to say I think but I’m dubious. Although the final few weeks before the harvest are very important, a vintage is also the reflection of the whole of the growing season. I note that Jean-Pierre Chevallier (Château de Villeneuve) is unlikely to release his Grand Clos Saumur-Champigny in 2008. JP will not release the Grand Clos if it is not up to the high standard he and Florence have set for this cuvée. Certainly the miraculous 2008 will have a lot of charm but as good as 2005? I’d be surprised.
Posted by Jim's Loire at 17:17

I have to agree with you Jim. It is te 2005 vintage in particular which is the elephant in the room which Sam doesn't seem to have spotted here. I am sure any debate of how 2008 stacks up against other successul vintages, such as 2002 or 2003 for instance, would see both sides receive well deserved support. But 2005? It wipes the floor with not only all vintages of the last decade but perhaps of the last century. As I have written elsewhere before now, Pierre-Jacques Druet compares it to the 1947 and 1921 vintages. I certainly haven't tasted anything remotely similar since tasting wines from the 1989 vintage on my very first visit to the Loire more than 15 years ago. It's a stunning vintage and I am still picking up wines and adding them to the cellar even now, most recently some of Joguet's Chene Vert and Domaine de la Butte's Mi-Pente.

Chris. Glad you agree. I think the qualities of the best 2006s shouldn't be underestimated, however.

PS. To be fair to Sam, I think he feels that those involved in the CF project handled the fruit better in 2008 than in 2005. That doesn't, however, make 2008 the better vintage.

If agree the fact the Cabernet 2008 couldn't be the vintage of the century, I would just disgress and point the Côt(malbec) of 2008 should be absolutely fantastic and better than the 2005. In Touraine the Malbec is recovering some respect.

Brianny. Agree that the reputation of Touraine Côt is deservedly rising, whether 2008 Côt is better than the 2005 is another matter.